The Passion of Tove Lo: Sexy and Smart

Tove Lo clearly has a “fresh” perspective to her lyrics. It’s a youthful approach that explores the ever-revolving doors of love through the eyes of sex, love and pain. The Swedish native brings that “purr” and “scratch” forth with her distinctive voice and brutal honesty. After a stunning and noteworthy EP titled Truth Serum, she released her full-length debut Queen of the Clouds in 2014 when I had the pleasure of talking with her.

This very down-to-earth singer/songwriter is taken aback by the flight of fancy in creating music and riding these moments of musical awareness and accolades with her song “Habits (Stay High).” It’s always a delight finding an original such as Tove Lo on the scene. Some emerging artists seem to be stuck in the “follow the leader” mode, which sometimes show that they have a lack of innovative style of their own.

Tove Lo is a force to be reckoned with and should be enjoyed for her styling, no-nonsense and musically rich debut. She gave me a clear-headed look at the past, present and future of her journey and creativity so far.

Showbiss: Before I discovered that Tove was your real name and Lo meant “lynx” in Swedish, I thought, where did you get this stage name from? It’s a nice play with the first letters of each name on a variation of “to love.”

Tove Lo: I know. That’s what a lot of people think. That it’s this cool anagram or something. That’s the best part… it’s just my name.

Showbiss: I read that you are friends with Caroline and Aino of Icona Pop.

Showbiss: It just so happens that “Ready for the Weekend” is my favorite track off their debut album (Lo wrote the song). 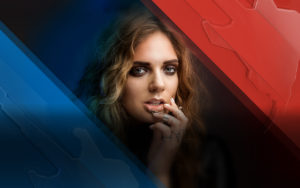 Showbiss: What a difference a year makes. I interviewed them in July of last year and now a year later, I’m talking with you. What were you up to this time last year?

Showbiss: It’s been quite a whirlwind, huh?

Tove Lo: Yeah, I remember I had my first songwriting collaborative. I’d just become part of the Max Martin songwriting team and I had just started working on my EP, I think. Getting “Out of Mind” ready, that video… I think it was at that time.

Showbiss: It’s a clever lyric on “Out of Mind” when you wrote, “You’re out of your mind, to think that I can keep you out of mine.” What do you enjoy the most about having this emotional and creative outlet of songwriting?

Tove Lo: I think for me, I used to be very against saying I use music as a kind of therapy, but I really realize that I do that a lot. It makes everything that I am feeling, going through and thinking, just easier to deal with. It’s also the one time that I’m not thinking about anything else than what is going on in that room. Or, when I’m on stage, the only thing that is happening… is that moment and I think it’s rare now to have that.

We’re always so connected constantly. Even if we’re sitting down at a table… we’re not at the table, we’re on our phones doing different things. There’s always ways to not be present. But, when I write and I perform, I’m always very present. That’s important for me.

Showbiss: Once the emotions are reformatted into the category of a song and you put the music behind it, it must be a rush to feel, “Phew, I got that off my chest!”

Showbiss: It seems your previous relationships did such an emotional number on you. The song, “Over” has such a good build musically and your lyrics hit from the gut.

Tove Lo: That’s a hard one to sing, actually. It’s one where I feel like… it’s obviously something that I did, that I’m very ashamed of and also, regret. But then again, I also know that a lot of people can relate to it. That song is one of the hardest to talk about. I always know that so many people have made mistakes and gone through the same thing. When people say they’ve had the same experience and can relate, it makes it easier for me.

Showbiss: Sure. That’s where a lot of the strength in this is found. There is such anguish and positivity found in the beats that anyone can relate to the emotional level of it. It’s the way you express how fucked up something is or how screwed up it is and how bad you feel about something. In that regard, that’s such a strong point… it’s not candy-coated.

Tove Lo: No. That’s what I’m going for. (Laughs) If I ever try to censor anything, then I can’t relate to it. I don’t feel connected to it. Yeah.

Showbiss: “Not on Drugs.” Tell me about the filming of the video. It seems like you got dry-powdered a lot.

Tove Lo: To be honest, that was like one of the most… if the “Habits” video wasn’t hard because you’re just drunk and it was just getting drunk and making out with your friends for three days. Then, the “Not on Drugs” was… in terms of just getting color powered. One of them accidentally threw it in my mouth. I ended up just throwing up green for the rest of the day. My teeth were like green. It was disgusting. (Laughter).

It was a really, really fun video. It was different being in this situation where it was only me kind of. Not surrounded by people or anything else. I’d never shot in front of a green screen before. That was also a new thing to try and think what it was going to look like, with these weird visuals surrounding me. That song is one that is on the happier side, so it’s easier for me to sing that with passion. That’s where I felt completely comfortable in performing it.

Showbiss: You are part of a music collective with Max Martin. Martin is so extremely successful as a writer and producer. What have you learned from his friendship?

Tove Lo: Mostly, when I’ve worked with him, it’s been for other projects. But, he’s definitely listened to my songs and given me a lot of pointers as to what to think about and what direction to go in when I’ve been questioning myself. It’s been really good. He said one really good thing to me, “Why make it so hard for yourself?” Which is what naturally comes to mind when I write, to try and think of that. To let the song be what it is and not try to make it into something else. The song has to be what it is. Does that make sense?

Showbiss: Yeah, don’t overthink it. I’m really enjoying your song “Timebomb.” Talk about positivity… I love it. What happened to you for you to write that song?

Tove Lo: It brought me in to explain how, you will never be better than in these first moments. When you’re with someone, usually what you think back to when you’ve been together a long time. You remember the first time you met someone or the first time you saw them… an instant attraction. I’ve never grown in love with someone. I’ve either been hit hard right away or I fell instantly, so I think that is what I wanted to describe in the song. The passion is going to be the best part, the start of it and that first moment. You can’t relive that ever. So, do you want to keep going or do you want to leave it at that?

Showbiss: I bet you enjoy the stage and getting into another zone.

Showbiss: I love “Paradise.” It’s just so upbeat and fun.

Tove Lo: Oh. Thank you. I’m really happy with all the songs. Actually, the only two that I’m bringing along on the new album are “Habits” and “Not on Drugs.” It was hard for me to choose. I wanted my first album to be something completely new, if you know what I mean. So, the easiest thing on this is getting the songs together and getting everything around it ready, as to the music. It’s been an intense process but I’m really happy with the outcome.

Showbiss: I’ve heard “Habits” several times on the radio. I just have to say, “Here’s to youth.” The woman you portray in the video could turn out to be a hot mess. The video reminds me of a “working girl’s” Lindsay Lohan.

Showbiss: Or should I say in Swedish, “Lou-han?”

Showbiss: The best to you. Take care.

Tove Lo: Thank you. You too. Take care. It was good to talk to you.