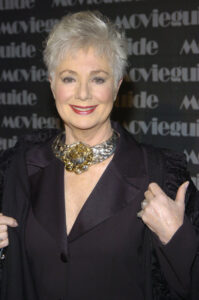 Families and friends took The Partridge Family into their homes for five years from 1970 to 1975. This popular television show is still in syndication. Shirley Jones portrayed the matriarch of this musical clan of teenagers and children.

For any movie buff, Shirley holds court anytime you enjoy films like Oklahoma, The Music Man, and Carousel on television. Her musicals are some of the best made. Whoever thought the loving “Mrs. Partridge” is the same person who had won an Academy Award in 1961 as best supporting actress. She did it playing a prostitute in the extraordinary film Elmer Gantry with Burt Lancaster. It was a great privilege to spend some real time talking with Shirley Jones about her whole career.

Showbiss: You had an exclusive contract with Rodgers and Hammerstein?

Shirley Jones: They discovered me at an audition in New York. I was on my way to college. I went to my very first audition and sang. Rodgers called Hammerstein to come and hear me at that audition …I never got to college and went into my first Broadway show called South Pacific. Unbeknownst to me, they were thinking of me for the role of Laury in their own independent film of Oklahoma.

Showbiss: Gordon MacRae’s voice is one of a kind.

SJ: Absolutely it is.

Showbiss: What do you remember about starring with him in both Oklahoma and Carousel?

SJ: There’s been nobody before or since that sings like Gordon. He was the all-American guy and that’s really what he was. He was a great Curly. Billy Bigalow wasn’t really quite right for him (Gordon’s lead part in Carousel). Frank Sinatra was supposed to play that role.

SJ: We got to location in Maine and Frank came on the set. We were doing the film in two processes, Cinemascope and Cinemascope 55. Frank, who is known for doing only one take said, “Listen, what are the two cameras for?” The director said, “We may have to shoot a couple of the scenes twice because of the two different processes.”

Frank said, “I signed to one movie, not two…” He got back in the car, back to the airport, and we lost our leading man. Gordon got the part.

Showbiss: When did you realize that you were a star?

SJ: It happened so fast. I never had a moment to say, “Hey, I’m a movie star.” It’s a lot of hard work. That was before the unions came in and said, “You can’t work actors like this.”  On location in Oklahoma, we worked fifteen- or seventeen-hour days, seven days a week. You don’t really get it, until after it’s over. Then you say, “Hey, yeah…I did star in this movie.” (laughter).

Showbiss: You have an incredible voice. Your spirited vocals will lead young people everywhere as a positive role model forever.

Showbiss: Could you pick your favorite song that you loved performing the most?

SJ: Yes, “If I Loved You” from Carousel. It’s my favorite score.

Showbiss: How did your part in Elmer Gantry come about?

SJ: They stopped making musicals. They were too expensive. My career was virtually over at that point. They said, “she sings, she doesn’t act.” So, I started doing other things. Fortunately for me, it was the time when they were doing powerful live television shows. If I was going to have to prove myself as an actress, I was going to have to do it that way. I did a Playhouse 90 with Red Skelton called “The Big Slide.” I played an alcoholic Sunshine Girl during the Mack Sennett comedies of the 1920’s. Both of us were nominated for an Emmy.

Burt Lancaster happened to see that show. He called and said, “We’re going to do this movie called Elmer Gantry and could you come in to meet Richard Brooks, the writer and director. I have a feeling that you would be wonderful in this part.” I didn’t know anything about the film. I couldn’t believe that they were thinking of me to play the prostitute.

I read the part and I couldn’t believe it. I said, “Wow, I’ll do it for nothing.” After seeing the first day’s rushes, Brooks said, “Not only are you going to be great in this film, but you are going to win an Academy Award.”

Showbiss: Amazing. You also have a great dramatic ability with a lyric. A lot of people don’t like sopranos. I do.

SJ: You’re right about that. My own musical director doesn’t like sopranos. (laughter).

Showbiss: Do you have a favorite leading man out of your films?

SJ: Oh gosh, it’s awfully hard. I fell in love with Richard Widmark. He was the one leading man that I did fall in love with. The film was Two Rode Together directed by John Ford.

Showbiss: I was nine when The Partridge Family debuted on TV. I used to rock out to the first Partridge Family album. I don’t remember much about the episodes, except the manager and the red-headed kid.

Showbiss: Do you have a favorite episode of that show?

SJ: I loved doing the show for five years. It was wonderful fun. I love the skunk episode when the skunk got on the bus. I love that one. We had a lot of wonderful people on the show. Jodie Foster premiered on the show playing Danny’s girlfriend. We did a show with Richard Pryor and Lou Gossett Jr. about doing our show in a firehouse. That was one of my most favorite episodes.

Showbiss: It’s been a blast. Thank you so much.

Fly, Robin Fly! Into the Bat Cave with Burt Ward