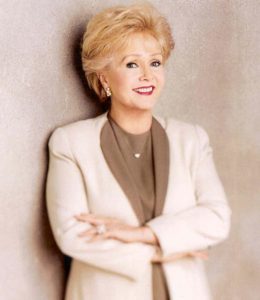 In the Hollywood heyday of the 1930s, ‘40s and ‘50s, MGM Studios was the crown jewel of Culver City. The publicity department created the slogan “More stars than there are in the Heavens.” One of those brilliant stars was Debbie Reynolds. The Academy Award-nominated actress and Emmy-winning TV star of Will and Grace took the time to talk with me in 2006.

There was always an optimism and strength in Debbie Reynolds. She had an overwhelming career in Hollywood and had an overwhelming personal life at times. Debbie Reynolds described her philosophy in getting through life, “Day by day…and I wonder what’s coming at me the next day. I always go by a five-year plan. I get through today and I’m not going to get upset for five years. I always picture a long tunnel and at the end of the tunnel, there’s a light. I know I can make it to that light and I’ll take five years to get there. Now…I’ve gone through many tunnels (laughter). So, I just keep trying. I never give up. That’s the philosophy of my family and that’s how my daddy and mother raised me to never give up.”

Continuing she added, “Each crisis seems to happen to me at the end of every unfortunate marriage. I have very poor taste in men. My first marriage [to Eddie Fisher] was a mistake but I have my two wonderful children [Carrie and Todd Fisher]. My second marriage was a mistake, you know. No one knew he was a complete alcoholic and crazy. That was very hurtful and harmful to all the children…then I made a third mistake. So you see…I have no taste in men! I have sworn off dating or going out.”

At this point, I interject that I bet she still gets asked. Her reply? “Oh. I get asked and I just laugh and thank them very much and say, ‘How much money do you want?’” The prestigious MGM Studios signed Reynolds in 1949. Head of the studio, Louis B. Mayer made sure that she was the female lead in one of her most famous films called Singin’ in the Rain opposite Gene Kelly and Donald O’Connor. The studio known for its remarkable roster of stars was going through a shift in power as three days after Singin’ in the Rain began filming, Louis B. Mayer was ousted and Dory Schary took his place as head of MGM Studios.

Reynolds remembered quite well and says, “It was shocking that they made that decision at that time. Mayer was so big and so great, so in charge of production and in charge of all of our lives. He made all of our careers. He chose all of us…Judy Garland, Donna Reed, myself, Janet Leigh, Lana Turner and Janie Powell. Politically, there was a big change then with the people in New York and the board of directors wanted him out of there.”

As Dory Schary took control, it has been noted that none of the stars were very happy with his role in the studio day-to-day operations. Laughing, Debbie says, “That’s to say the least! Nobody liked Mr. Schary. In respect to his family…he had a very nice family. But he was a cold potato. He took over that position. I don’t know how it happened…but it happened monetarily I’m sure. Certainly no one wanted Mr. Mayer gone in lieu of Mr. Schary.”

Reynolds learned tap and dance in three months preparing for Singin’ in the Rain. This is amazing for someone with no previous experience whatsoever. She elaborated on just how tough this was and how a special gentlemen offered her words of advice when she was at an emotional breaking point of trying to learn the difficult routines used in the film.

“Well. We all rehearsed close together in A, B and C rehearsal halls. On a break, I was crying under a piano while out of everybody’s sight, because it was so hard for me. I’d never danced before. I was 17 and it was all very overwhelming. I didn’t know anybody. My mother didn’t come on the lot. She felt that that was my job and I could handle it. She had more courage in believing in me than I did. So, I heard a voice say, ‘Who is that under the piano crying?’ I said, ‘It’s just Debbie. Who is that?’ He said, ‘Well. Give me your hand.’ This hand pulled me out and it was Fred Astaire.

He said, ‘Why are you crying?’ I said, ‘It’s so hard. This is so difficult. I have to learn everything so fast. They’re so great and I’m just beginning.’ He said, ‘Well…now Debbie. Dancing is hard to learn. I’m going to do something I never do. I’m gonna break a rule and I’m gonna let you come in and watch me rehearse. “You know who I am?’ I said, ‘Yes sir. I know who you are.’ He had a security guard always on the door.”

“No one was ever allowed in to watch Fred Astaire rehearse. He had a drummer and that’s what he used and a cane. That’s how he created his dance steps. So he said, ‘You sit there by the door and don’t bother me now. Just watch. You’ll see it’s not easy and if I get too upset…you just crawl on back and go to work.’ I sat on the floor and watched him work. He threw his cane and was red in the face. He’d look over at me and say, ‘This is what it takes. No sweat, no gain. It’s really hard. This is the only way you can do it. You get back in there and stop crying!’”

Debbie Reynolds is such a joy to watch on Will and Grace. Re-runs of the hit comedy are still in syndication on television. Reynolds explains how the role of Grace’s mom came to her on the show. “The producers. The producers are just adorable. Max and David. Max is gay and David is not. Their school friends and they produced Will and Grace. They are so funny and they’re great writers. They asked me, ‘Would I do it?’ And I said, ‘Sure. I’d love to.’ They wanted a funny mother. I said, ‘As long as you write her funny, I’d love to do her. I just don’t want to do a boring mother. Because I’m not a boring mother and I don’t want to do a boring mother.’ So, they wrote her kind of like me…you know.”

Debbie Reynolds shared a few memories of her friendship with Judy Garland and how difficult it could be working in the studio system during that time. “We were great friends. We met at MGM and she was making The Pirate. She was going to do Annie Get Your Gun but she got sick. She was not feeling well. She was very thin. Unfortunately, she was taking too many pills. The studio had put her on a lot of these anti-depressant pills because they had their own doctors there. They’d give her vitamin shots, which we know now was probably speed. They offered that to everybody. It wasn’t new. She wasn’t the only one who took the pills or shots. I didn’t take them because I was afraid of needles. I didn’t want them because I didn’t like them, so I never went on them.”

“They worked many hours [the stars] from six in the morning until twelve at night sometimes and no days off…except Sunday to fall apart. Then, shoot again on a very tight schedule.

If you are a big star like Judy and Mickey Rooney…the musical people were pushed very hard. So, Judy was taken off the strict production schedule,

which really broke her heart and made her very depressed. It’s just like they did from Fox with Marilyn Monroe. They fired them and just throw them out and let them stay home and be depressed. They’re very cruel. They use them up and throw them out. ‘Cruel’ is the word. But, we all loved Judy. She was just the funniest lady. Judy and I were on the road. We worked nightclubs together. After work, we’d hang out together. Judy was having her cocktails then. I didn’t dri

nk then yet so then I learned how to drink white wine…I rather enjoyed that so…I still enjoy that.”

Debbie Reynolds was a classic entertainer with a history of remarkable achievements in film, television and theatre.