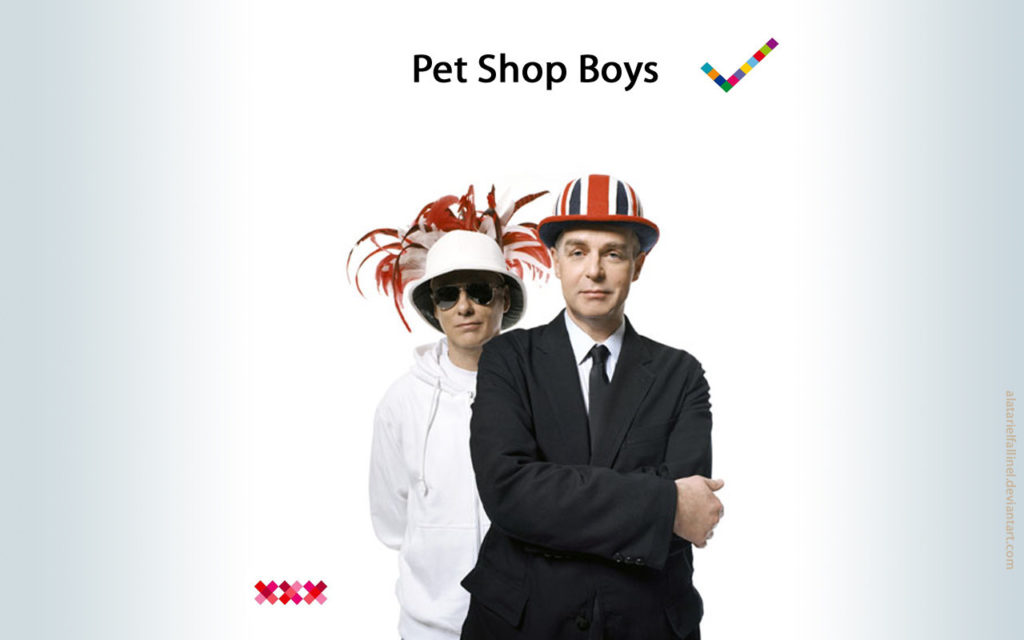 Their sound is unmistakable in the world and history of pop music. Neil Tennant and Chris Lowe have a formidable career and still create magical vibes with their music and lyrics. Both men are the recipients of the Outstanding Achievement in Music Award at the Brit Awards. They also broke a Billboard record with their single “Love Etc.” off of their album Yes as it hit number one. This set a new record for most number one singles on Billboard Magazine’s Dance/Club chart. It’s an impressive total of nine songs that have reached this height in Pet Shop Boy’s career. I had the great time speaking with Neil Tennant about the drive and vision of Pet Shop Boys, what’s in store and to capture a few thoughts and memories of their remarkable career as music icons.

Showbiss: You both are so chic!

Neil Tennant: (laughter) You wouldn’t think I was chic if you saw what I was wearing now!

Showbiss: Congratulations on Yes. It’s a joy to listen to. On the song, “King of Rome” the orchestrations on that are so pretty.

NT: The arrangement was actually done by a young Canadian composer called Owen Pallett who is very, very talented. He also operates under the name of “Final Fantasy.” He’s a very talented performer and composer. We’d heard his work on other albums so we got him to do it. I think he’s done an amazing arrangement.

Showbiss: Please tell me about The London Metropolitan Orchestra and working with them on this.

NT: They just call themselves that, they are actually a collection of session musicians and we’ve worked with them before. They are all excellent musicians. It’s very exciting when you go into a studio and do the orchestral overdubs because it’s so big and we work at Abbey Road where The Beatles used to work.

Showbiss: Have you and Chris ever thought to put together a symphonic illustration of your music with no vocals that would cover your body of work?

NT: No. We are writing at the moment a ballet for the Sadler’s Wells Theatre in 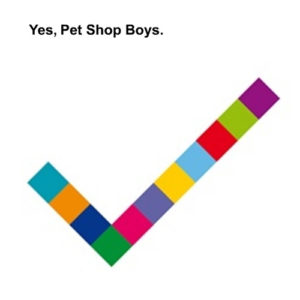 London, which is a famous ballet theatre. We are going to read it next year.

NT: It’s going to tour as well. So, that’s a big thing. It’s not quite symphonic but a mix of electronic and strings. Also, five years ago we wrote a soundtrack for the classic silent film, The Battleship Potemkin. We collaborated with a German composer and have performed that with an orchestra several times around Europe. We have quite a symphonic thing going actually.

Showbiss: Two songs on Yes that I thought were warm, romantic and real are “Did You See Me Coming” and “Vulnerable.” Both songs showcase the softer and less cynical side of Pet Shop Boys.

NT: Well. The Pet Shop Boys have a very strong romantic, warm side. Going right back to “West End Girls” even. Right back to the first album, songs like “Love Comes Quickly.”

Showbiss: Definitely, though some of the songs talk about tough love and broken relationships.

NT: “Vulnerable” is like that really. What we try to do with our songs is to take real life and put it to music and real life isn’t always pretty and gorgeous. But what counts is the feeling and the truth. That’s what we try to put to music even if it’s ugly or not.

Showbiss: The song, “All Over the World” is amazingly interesting to listen to and for me, screams high fashion. Have any major designers requested to use that song on the runway?

NT: No, they haven’t. The only people who have done is UNICEF. They are doing an advert and they sent us a rough version of it. I think that’s all happening and it works very well. You know, fashion designers don’t ask permission. They just use it if they want to. I agree though. It would be great on a catwalk with that Tchaikovsky riff.

Showbiss: I read that you are an admirer of Noel Coward. Is it possible that his wit and bon vivant is part of your lyrical style?

NT: Yeah, I grew up with it to a certain extent and even before Noel Coward; do you know Gilbert and Sullivan?

NT: In school we used to sing these songs with these very witty lyrics and I think it just gets into your way of thinking. One of the unusual things about The Pet Shop Boys is we write songs that are kind of witty or try to be funny. That comes a little bit from me from Noel Coward, and Cole Porter for that matter and Stephen Sondheim, these are amazing lyricists. I can only aspire to be as good as them. They are definitely a very strong influence on me.

Showbiss: How did the collaboration with Xenomania come to be on Yes?

NT: Well… we phoned them up. (Laughter). The reason we phoned them up is they made a long series of singles and albums with this girl group called Girls Aloud in Britain, like The Spice Girls. What is interesting is they experiment with pop music. Every record is different and also they are very electronic. When we’d written the songs we’d written, we thought that they’d make it fresh and they’d make us sound better and they’d make us work hard and we wrote three songs with them.

Showbiss: For me, The Pet Shop Boys have their own Warholian sense of design in your production values for your live performances and the artwork for your music. How would you describe this artistic expression?

NT: We try to do something that is simple or minimal but with a certain glamour. That’s why it’s a bit Warholian actually. It’s a bit like Andy Warhol; we think that anything can be art.

Showbiss: I saw the Brits performance and that was amazingly well done.

NT: That did take a lot of work. We spend a lot of time on the presentation actually. The same woman, called Es Devlin, designs the show we are about to bring to the United States. She designed the Brits performance. We worked on that with her. We want to do something that people think, “Wow! That’s great.” That’s what you really aspire to is to do something that entertains people and they think, “Wow. I’ve not seen a show like this before.” The new show, believe it or not, is based around 300 cardboard boxes. They look amazing because there are projection screens and media and all sorts of things. It’s a clever show and also very multi-media with all this film. It’s very exciting.

Showbiss: You’ve worked with three of my all-time favorite entertainers, Liza Minnelli, Jennifer Saunders and Joanna Lumley. First, a question about Liza Minnelli, I had the privilege of speaking with her a few years ago. She told me about the time that you and her were doing Results and you and Chris had dinner with Frank (Sinatra) and Sammy (Davis Jr.).

NT: With Frank and Sammy? Yes!

BB: What do you remember most about producing Results?

NT: Results was a very interesting project. The reason we did it is because Liza hadn’t done a lot of pop music. She hadn’t done electronic pop music. So, it was a challenge. Also, Pet Shop Boys… we’ve always liked stars. We like star quality and Liza’s got it in bucketful’s. While she was recording this, she was touring with Frank Sinatra and Sammy Davis Jr. We were very thrilled to meet them both.

Actually, we tried to get Liza to do a duet with Frank Sinatra for the album. There is a song on that called “So Sorry I Said.” It was written originally as a duet and Liza wanted to do it as a duet with me. We said, “No. Frank Sinatra, it will be amazing!” Anyway… she wasn’t that keen on that idea. One of my few regrets in life professionally.

Showbiss: That’s a beautifully done album. I also really love “If There is Love.”

NT: That’s my favorite track on the album. It’s great when she reads the Shakespeare and the sax is playing. That and “So Sorry I Said.” Another great track that my iPod shuffled onto is “Twist in My Sobriety,” where we got that guy to rap “Liza with a Z” at the beginning. Also, the issue of sobriety, which is always such an issue with Liza. She really went for it on this album. It’s funny… it has this little audience, this album. People often talk to us about it. You know, we’ve just written a song for Shirley Bassey.

NT: She’s doing this album with David Arnold who does all the James Bond soundtracks. Anyway, he phoned me up the other day and played it on the phone to us and it sounded great.

Showbiss: What’s the name of the song?

Showbiss: (laughter) Also, will you tell the story of creating the song “Absolutely Fabulous?”

NT: The back-story on that was Chris and I loved the show when it first came out. We decided to make a record. I don’t know why we even did it really. We did it in the studio over a couple of days. We just thought it was hilarious. So, we phoned up Jennifer Saunders and we sent it to her and she really, really liked it! And she came in the studio and did some ad-libs for it. Most of it comes from the first couple of shows of the first series. Then we got someone to do a little video of it. I don’t know. It was just fun and something to do. In a way, we did it because we wanted to have dinner with her and Joanna Lumley (laughter).

I was always disappointed, they were going to put it on the show, you know and they didn’t in the end. A lot of people criticized us for that because they thought it was just stupid.

Showbiss: Oh no! That’s such a fun song to listen to.

NT: I think it’s fun. A lot of people don’t want you to be fun. We actually like doing things because… they’re just fun.

Showbiss: Another thing that struck me as so cool was seeing Brandon from The Killers and Lady Gaga perform with Pet Shop Boys at the Brits.

NT: Lady Gaga was great and very professional. Very into it, she came as a China teapot. She had this amazing outfit made that was fantastic. The combination of her and Brandon who is like a rock singer was a very unusual combination. They were so great, the pair of them doing it.

Showbiss: Well. I know it sounds corny, but your music makes up the fabric of my life. Thanks for talking with me.

Neil Tennant: No problem. My pleasure.

Marina and The Diamonds: Music’s Modern Woman Elizabeth and Michael