Ms. D and Me: Life With the Invincible Bette Davis 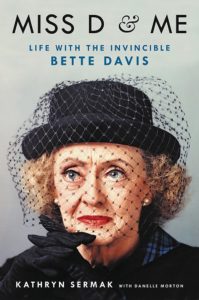 The last decade from 1979 to 1989 of actress Bette Davis’s life was both monumental and monstrous. Monumental in the fact that she continued to work after a brilliant reign in motion pictures that initially began in 1931 with the film Bad Sister. In her career, Davis also won two Academy Awards for her performances in Dangerous in 1935 and Jezebel in 1938 while garnering another eight nominations for Best Actress from The Academy. In addition to her numerous achievement awards during those ten years, she portrayed a wide array of memorable roles in the span of over 50 years. Now… Why monstrous? Davis in the last ten years of her life not only fought a battle with cancer, she suffered a debilitating stroke while in the hospital battling the disease.

In 1979, Bette Davis was looking for a personal assistant or “Girl Friday” and this is when Kathryn Sermak enters the picture. Remarkably, Sermak had no idea of the magnitude of fame her employer had and had never seen a motion picture of Davis’s before. In Miss D & Me: Life With the Invincible Bette Davis Sermak shares their initial meeting, the strong work ethic of Davis and her Yankee spirit and strength along with the special bond that evolved from just the employer/employee relationship to a friendship of caring, respect and admiration for each other. Other than Ms. Davis’s long-standing circle of friends, it’s safe to say that Kathryn Sermak truly got to know Bette Davis best during these years.

Sermak’s memories of this time period are presented with fondness, realism and a good bit of humor and love. Bette Davis’s personality, strong character and wisdom is brilliantly captured within the pages of Miss D & Me. Whether it’s Kathryn truly being there for Davis during her hospitalization and recovery or Davis and Sermak on a wild road trip in France to Davis teaching Kathryn how to soft boil an egg; there are too many memories that present the ever-growing bond between these two women. Kathryn Sermak presents the real person behind the legendary actress in a glorious, riveting and oh-so-human way. Even if someone didn’t know of Bette Davis as Kathryn Sermak initially didn’t… It’s truly a must-read in all regards because of her perspective on their unique friendship.

Judy Garland and Joey: A Son’s Memories of his Mom Eye To Eye: Graham Nash