On the morning of Friday, June 26, 2015, The Supreme Court ruled for the legalization of gay marriage across the United States. Then… the interview with pop iconoclast and out artist MIKA arrived via the phone that same day. It was a monumental and marvelous day on all accounts.

With the release of “No Place in Heaven” MIKA delivered another fresh breath of ideas and energy on his fourth CD. His individual qualities as a singer/songwriter and musician are purely one-of-a-kind.

MIKA opens up about his “coming out” process, talks about “No Place in Heaven,” while also offering thoughts on his childhood and where his music will take him next. He shared these views in a genuine, reflective and intelligent way. If there is one man who could provide an answer to, “Where have all the good, gay guys gone?” as he sings in his latest hit, “Good Guys,” Mika is living proof of being a modern gay role model.

Showbiss: Thank you so much for taking the time.

Mika: Oh, it’s a pleasure. I haven’t really slept for twenty-four hours, but I’m really happy to have the opportunity to do this. So, thank you.

Showbiss: You bet. When you look back at your childhood and teenage years, what effect or influence did this have on the musical sensibility of your work?

Mika: 100 percent of it was formative in the kinds of music I make and the reason why I make that music. I always felt a little on the outside, looking in. I was often the recipient, especially in school, of a lot of negative energy. Instead, I processed that as my form of revenge. My form of procuring power was by writing songs or by having delusions of grandeur. Those delusions of grandeur manifested themselves in songs that made me bigger than life – songs in that moment where I was actually powerful and that my voice had a reason. 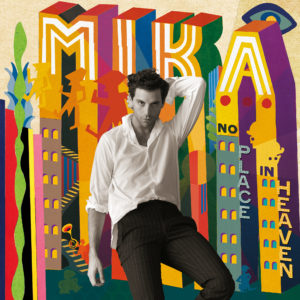 The thing that gave me the feeling of justification, for those who didn’t understand, was melody. If you look at it, a lot of people who are outsiders who make pop music…. pop music is overwhelmingly melodic. That is why.

Showbiss: “No Place in Heaven” is not only musically invigorating, but it’s intellectually stimulating. As a songwriter, how do you find that balance?

Mika: First, thank you. One thing that never gets boring is telling stories. It’s easy to say, you want to make a singer/songwriter album, but what’s that mean? I found that I wanted to make a storyteller’s album. I wanted it to feel like it was made in a bubble. When you read a book, you have a beginning, middle, an end, and you enter that person’s world. Right? Then, as soon as it’s over, you kind of miss it.

When you listen to pop albums today, a lot of times, sometimes you step into it but don’t feel like you’re going from one song to the next. A lot of the time, they’re written by different people and produced by different people. I wanted to make a pop album that really told a story, the same way that pop albums from the 1970s did. It’s a second intimate diary for that hour the album lasts. You’re really going into someone’s head. That’s the kind of “pop” I wanted to make on this record. I made sure that the lyrics, the stories and the melodies were the most important… far more than the instrumentation.

Showbiss: I think the most stunning song is “Ordinary Man.” Lyrically and compositionally, it’s one of the most beautiful songs you’ve written. What is your personal reflection on writing this one?

Mika: I think heartbreak provokes strongly the most honestly, beautiful songs. I think that the reason for that is, when you’re heartbroken, you feel completely worthless. And so, what do you do when you feel worthless? You protect yourself and you write songs in order to make yourself feel better, in order to establish a sense of worth again. What I love is, how it’s like an emperor whose been punched in the stomach, it’s like a little prince whose been forced to come down to earth.

On the one hand, it’s touching and beautiful and whenever anyone has ever been heartbroken, they can relate to it. On the other hand, it’s really pompous in the most delicious, fairy-tale way. It’s like this little prince who’s been bruised and licking his wounds. He just hates the fact that he’s normal! I think that’s the perfect way to describe being dumped or being heartbroken. Feeling normal. Which is, essentially, the one thing that every single one of us is terrified of feeling. I think as a song, I thought that this “age-old” sentiment and that mixture of really big, grand orchestration and grand opera-style melodies, with the normal and now, everyday action… opening a beer can, sitting with friends that you secretly hate, going to the toilet, making your bed… that combination. In a way is what gives it that Nat King Cole-kind of torch quality. That’s definitely what I was aiming for. I wanted this Nat King Cole torch quality, but with banality.

I looked at a lot of those songs from that “golden age” of songwriting in America, especially in the 1950s. I realized how often the lyrics talked about such everyday things. Yet, the melodies and the orchestrations were cinematic. If I had to tell you my main ambition for my next album, what I would love to do is to really make an album that absolutely explores that kind of cinematic and almost fantasy-formic style of songwriting. Everyday life is turned into something much, much larger and much bigger. That would be the next record I’d like to make. That’s why I left the last song on the album because that’s where I want to go next.

Showbiss: I really admire the fact that you took your own tempo in coming out and not wanting to be labeled. When it comes down to it, it’s a very personal subject. Was it harder to address because of being in the public eye?

Mika: I think in general, Bill, I did something that most writers do. They write about their life, their

lust, they write about sexuality and do it quite publicly. However, as a result, it took a long time for my kind of private life to catch up with my public life. Until I went through all the steps of addressing all the different issues in my private life… from my parents to my siblings and my personal relationships. Only when I felt secure was it something that I could address with full candor, with full honesty, with full transparency, which meant that I was solid. In that, my basis of talking about my own sexuality and the politics of sexuality would be built upon a very solid foundation. That was the most important thing.

The idea of looking at it in terms of “tempo” as you say, is really a kind of genius way of describing it. Everyone has his or her own rhythm. It doesn’t mean you don’t have to talk about sexuality. It doesn’t mean that you don’t have to be sexually active. It doesn’t mean that you don’t have to have a normal life, in all its different stages and transitions. It just means that you have to address one thing at a time. I had already taken my writing and addressed it publicly, rather than privately. I had to deal with the consequences of that. Though, in the long-term scheme of things, looking at a lifetime… really, that gap in bridging the gap of four years, is really not very much.

Showbiss: You’re so right. Besides singing and songwriting, what would you say is the most enjoyable aspect of your life right now?

Mika: I’m free and I have nothing to hide. I’ve managed to take steps toward that very aggressively. From the age of 30, I decided to confront all of those things that would lead me to “not” being free. Therefore, I can find pleasure from the biggest challenges to the most banal moments. That is something also, that I really want to protect as much as I possibly can. I think you know it’s quite remarkable when putting it in the context of the recent [Supreme Court] ruling. I just feel the one thing that truly makes someone happy is feeling like they have options, and that they have the same options as everyone else. That’s why I think the ruling is so phenomenal. It procures positivity, which in turn will procure tolerance.

In terms of my life, the one thing that makes me truly happy, apart from the ruling and all that stuff, the one thing that I want is, to kind of stay free and to stay hungry… to keep my heart light and my brain serious. I think if you do that, you can stay happy. Of course, it’s a challenge presented to all of us. That is our number one challenge, as we move on from day-to-day.