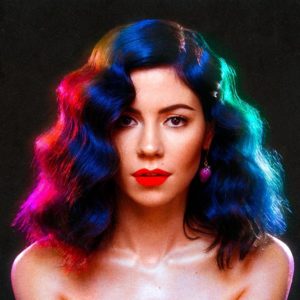 Marina Diamandis played with letters in her last name to create her moniker of Marina and the Diamonds.

Yet, her distinctive, natural way of bringing forth raw and thought-provoking honesty

to her songwriting is anything but playful. Since the beginning of her music career in 2010, there has been a luster and shine in discovering her persona of feminine and feminist wiles. This mixture of tough and tender… whether personified in “Electra Heart” or wildly let loose in clever intensity for her debut of The Family Jewels, is truly a unique and fascinating perspective, one that is truly her own creation.
The emotional release of self-expression and what moves her as a vocalist and songwriter is just as potent for her this release. Marina takes the upper hand in addressing a spectrum of brilliantly nuanced emotions. This time around, the musical edge and structure is significant in that it moves in a current of musical tones that can flow from subtle and subdued to vividly stylized beats. FROOT has smarts, heart and beauty and musically… that’s no easy accomplishment. Marina spoke with me about this latest manifestation of art and the brilliance of a new crop of ideas.

Showbiss: I wanted to start off with the musical production aspects of FROOT. You have Everything Everything on guitars and Jason Cooper from The Cure on drums. They provide an exciting musical energy for the album.

Marina: They really did in terms of actually giving the record a groove… a genuine groove. In terms of guitar, Alex (Robertshaw) from Everything Everything gave the record a real tone that I hadn’t really explored before. I’m very lucky to have them on the record.

Showbiss: The title track “FROOT” has a real slick style to it. I imagine this was a fun song to write.

Marina: Yes, it was very fun. It’s actually one of the last songs I wrote. I was going in to the studio and it was a pretty dreary day in January. I was like, ‘I want to write something weird and upbeat and cheerful.’ Actually, the holding lyric was ‘pamplemousse’ which is grapefruit (laughs) in French. I titled it in the beginning, so “FROOT” is something else, though.

Showbiss: The video is beautifully done with a 1970s chic Vogue look to it. You look stunning and I love that you break into that sci-fi ‘ah-ah-ah’ at one point in the song.

Showbiss: How did that little break get added?

Marina: When I was writing the song, by then I knew that the structure wasn’t going to be exactly orthodox. So, I just wanted to do a weird opera sci-fi bit on that and not have any lyrics. Yeah, it’s one of my favorite bits, actually!

Showbiss: Was “Immortal” a difficult song to get it just the way you wanted it to be, in terms of songwriting?

Marina: Umm, you know what? It’s funny that you ask about that. It wasn’t one that was troublesome but it did take a little while. Just because I didn’t want the lyrics… I didn’t want anything to be throw-away and it was talking about a serious subject. I wanted things to fit in a way that would make me feel like I’d put out the right message. Yeah, it was long. It was longer than usual.

Showbiss: In dealing with the subject matter of death, it’s delicate and beautiful. Now, I’d like to backtrack a bit on two songs from Family Jewels. When I first heard you on Family Jewels, the first song I kept putting on repeat was “Shampain.”

Showbiss: I’m an avid Marilyn buff and listening to the lyrics, I couldn’t get the image of Marilyn Monroe out of my head.

Marina: Really? It is kind of that type of disastrous, comedic, camp, film star message. I can see where you get that.

Showbiss: Also, your song “Hollywood,” you wrote that even before you came to the states?

Marina: Oh, yes. I wrote that song when I was twenty-one. By the time it was released, I was twenty-four. We had been receiving all those kinds of gossip mags and that kind of gossip tabloid culture for pretty much a whole year. It was all Paris Hilton, Nicole Ritchie etc. We really didn’t consume gossip the same way then, as we do now on the Internet, where you can get it everywhere. It was this popular culture thing and it was very destructive. It was very all consuming for a young girl, so, that’s how I wrote about it.

Actually, I did go to America. I went on my own to Miami for a trip (laughter) when I broke up with a boyfriend. I went away! Actually I came up with a few ideas then. But yeah… it’s such an invasive kind of thing, the American effect. It was hard to ignore and I was interested in it. It wasn’t about America per se, it was more about L.A. culture and how I thought that was negative.

Showbiss: Got it and I totally agree. Back to the new songs and your single, called “Forget.” How would you describe the musical vibe on this?
Marina: It’s very simple, classic like… I would dare say, it’s like pop-rock, which I haven’t actually done before. It’s one of the simpler songs I’ve ever written but I really love it. It’s really satisfying to perform and listen to.

Showbiss: The thing I’ve admired most about your songwriting is the portrait you paint of emotions and your ability to thoroughly scrutinize the complexity of the modern woman in all their good and bad sides. Also, as importantly, how women are represented in the media. Will you elaborate on your philosophy on that?

Marina: Wow. You’ve done a very good job of exactly describing what I do (laughter). I don’t know if I can elaborate on it…what I can say, is that for me, I think to answer to artistic identity and what that is, I think I always felt quite troubled or quite misunderstood. For me, it was never about sounds or genre necessarily. I can get around a lot in terms of genre. I can do a really soft song and I can also do something like “Mowgli’s Road.” But, I don’t think people really knew what I was.

Now, I feel very confident because my identity is actually my lyric. The lyrical style which you just described. That’s my skill as a songwriter. As far as not being categorized, I’m at peace with not being able to be described very well. It’s my sound, my voice and my lyrics and the rest is secondary, really.

Showbiss: It’s a voice out there in a musical landscape, where what you write about… those kind of things aren’t addressed so raw and so eloquently. It could be construed as cynical but at the same time, why go into something with your eyes shut and not be able to communicate how you feel about it?

Showbiss: I’m afraid to use the word “happy” around you (laughter).

Showbiss: It’s true. Don’t ever lose your analytical dark side though. Your lyrics sure have gotten me to understand love and relationships a little clearer.

Marina: Yeah, I don’t think you have to worry too much. It’s not like… with the song, “Happy” I think people think, “Oh, she’s happy now!” It’s more about everything around you and your response to everything that happens around you. It’s more about that… as opposed to getting up every day and feeling really happy. It’s like, no, that’s not realistic. You can’t feel happy all the time. That’s abnormal. But, it is nice to be in an emotional state where you are stable and you are welcoming of being happy.

Brendon Urie: The Force of Panic! At The Disco Pet Shop Boys: A Resounding “Yes”