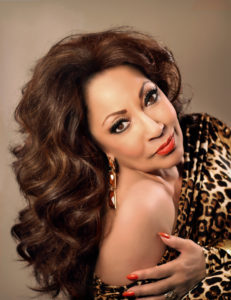 May you forever groove on. – Linda Clifford. As one of the revered female singers in the classic era of disco, Linda Clifford rode a tidal wave of success from 1977 to 1980. Her beautiful voice held the beat while her rhythm and blues brought her strength and emotion out. “If My Friends Could See Me Now” blasted out on the dance floors of the country and most notably was a solid anthem at the most renowned night club on the planet during this time period. Yes… Studio 54 in New York. As every succeeding hit continued to move the crowds in a disco fever.

With the recent remastered releases of four of her albums on CD by Blixa Sounds… it was a distinct pleasure to learn more about Linda Clifford, her talent, her beginnings and her moxy. She’s quite a lady.

Showbiss: Congratulations on the remasters of your albums, all four of them!

Showbiss: I was in high school during those years but my husband of ten years and partner for 24… 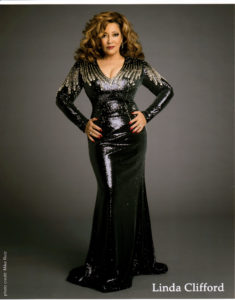 Showbiss: He was dancing in a disco to you back in Boston.

Linda Clifford: Ha! That’s great. That is so wonderful. My husband and I have been married for forty years.

Showbiss: I know that back in the late 1970’s, disco was so prevalent but your R&B recordings on these albums are wonderful. Your voice is beautiful and spiritual.

Linda Clifford: Thank you. Thank you so much. I had been doing jazz and R&B before I started doing the pop/disco stuff. I liked to do a little bit of R&B on some of these albums.

Showbiss: I want to take a time machine back to 1969 and you being in the Fosse film musical Sweet Charity. Please share some of your memories of working on this film.

Linda Clifford: Okay. Let me try to remember because it has been a long time, obviously. The “I’m a Brass Band” big scene… I was in there. Then I was in the scene where they went for their marriage certificate. I was in there with a guy. I remember the guy’s name was Rudy. That’s all I know (laughter). And the two of us were supposed to be getting married… what else? I can’t remember. I was in it and it was fun. Because I love music so much, just being in that was tremendous.

Showbiss: There’s a song you perform called “I Want to Get Away With You” off your album I’m Yours produced by Isaac Hayes. I thought that had such an essence of Isaac Hayes; you’re almost expecting him to jump in on the vocals with you.

Linda Clifford: I know. I wish he would of. We had so much fun working together in the studio. He was such a pleasure to work with as well as having a lot of fun and doing a lot of laughing, we got some beautiful songs recorded. He was truly an amazing producer. He was old-school of what you really consider a producer. Not what we have today; people are like “Okay, here is the song, go in and sing it” and they expect you to come up with the medley, to come up with the lyrics and they give you a couple of beats… I’m thinking “Hey. Wait a second. I’m writing and producing myself then.” So, it’s very different.

Showbiss: One of my favorites off your album Let Me Be Your Woman is the song “Don’t Give It Up.” After hearing it for the first time… I continued to play it over at least six times!

Linda Clifford: Get out of here!

Showbiss: The combination of sass, class and smarts really works on this and I wanted to know the back story on this song.

Linda Clifford: You know, we were working to write a song that would be a follow-up to “Runaway Love.” With kind of that same feel but with a different storyline. I just started thinking about it and thinking about it. I thought, you know; we’ve got to educate the younger generation and all these beauties who come up behind us so that they know they don’t have to go half-naked down the street; they don’t have to do all these things or just jump in a car just because somebody says they’re going to do something for them. To learn to respect yourself and those are the ideas of where that came from. “Don’t you get in that car! Don’t do it.” (Laughter)

Showbiss: Don’t you think it’s even more prevalent in 2018?

Linda Clifford: (Laughter) Honestly, sometimes I have to stop and go “Oh my god. Did your mother see what you were wearing? Because, it’s kind of getting crazy now a little bit. I know I’m older and people are gonna say “Oh, you’re old. You don’t know what you’re talking about.” But, old has experience. You know I’ve been through that phase. I’ve been through that with my daughter. She was young and wanted to do that kind of thing too, so experience counts for something I think.

Showbiss: Of course, it’s like that old expression “Respect your elders.”

Linda Clifford: Exactly. The key is to get them to listen. Slow down enough to listen. Everything is moving so fast now with the internet. Back then, when this song was written, you didn’t walk around with an iPhone or checking your email every minute… that kind of thing. It’s just so different.

Showbiss: How did the deal with the label Blixa Sounds come about to release your four albums?

Linda Clifford: They approached me because there is a big turn-around in the music industry now and a lot of the original masters are being reverted back to the original artists. So, when they realized that I own the masters to the songs of my recordings, they wanted to remaster these recordings and get it out. I thought, “Really?” Of course, I had the option to do it myself but I thought I’m too old to be doing that! Let them do all that work and they will pay me some money which is lovely. They put these out and they do a beautiful, beautiful job with the acts that they have. I saw some of their work and I thought this is a company to be reckoned with and I don’t mind being on this label.

Showbiss: Will you take me back to Studio 54 because I’m so looking forward to hearing your memories of performing there?

Linda Clifford: Oh my gosh, okay. Studio 54…well, everything that you’ve ever heard about it is true. Let’s start there. Everybody went there. Everybody who was anybody used to go to Studio 54. I think the first time that I went, I wasn’t on the main floor. They took me up through a back way and I ended up in the DJ booth because I had not seen how people reacted to my music. They said, “We want you to see something.” They took me up to the DJ booth and people were just going crazy, they were dancing and nobody knew I was there. Then he put on “If My Friends Could See Me Now.

” He said, “Watch this.” I had never in my entire life seen such craziness. This place went wild. He said, “Do you believe that? That’s for you.” Then he introduced me on the microphone and told the crowd who I was in the booth, etc. They were like “Oh my god!” They started screaming and

dancing and I was crying. I had no idea. It was a joyful cry, trust me. I was just thrilled to death.

That was one incident there. After that when I went there to perform, I was above the crowd on like a walkway and it moved, so you were going forward or backward or whatever the deal was. I worked there quite a few times with Phyllis Hyman. They would have both of us in there at the same time and the crowd would always go crazy. Then of course, I worked there alone. With each new single that I released, they always had me back and it was just amazing.

Linda Clifford: They were all there, all the time. That was the place to go.

Showbiss: Lastly, will you tell me how you were signed to Curtis Mayfield’s Curtom label at the start of your reign as a disco recording star?

Linda Clifford: Oh sure. That’s a funny story because I really am quite shy. I can be open and fun and all that but I’m basically a shy person. I was living in Chicago; a single mom at that point. I was raising my 14-year-old sister as my mom had passed away. So, I had my sister, I had a 14-year-old foster child and I had a 1-year-old son. I thought I have to make a way to make things right for these kids, so that they can go to school. I couldn’t sing in clubs for the rest of my life, that’s it. I’m going to get myself a recording contract.

I just got dressed up and showed up at the record company and had no appointment. The secretary I guess she thought well… she looks like somebody. I mean who would be so bold as to just walk through the front door and go “Hey! I’m here.” Which is pretty much what I did. So, she escorted me up to the office and I’m like “Oh my god. I can’t believe this is happening.” So I explained to him and introduced myself to him and said I am a singer and I’m appearing at The Playboy Club downtown. I would like to work for your label and if you would come and see me, I think you would like what you hear. He said, “Thank you very much. That’s very nice of you.”

He was very friendly and I left and I thought, well… if they show up, fine. If not, at least I tried. So the first few nights go by and nothing. Then all of a sudden one night I noticed this movement in the audience… tables being moved etc. and it was Curtis Mayfield, his partner and about twelve other people. They all sat right in front in the middle of the room at The Playboy Club. I just gave them everything. I gave them Aretha, I gave them Barbra Streisand… I gave them everything that I had and left it for them to decide what they wanted. And two weeks later, I had a contract.

Linda Clifford: It was pretty bold actually. I don’t know if that’s cool I would say. (Laughter)

Showbiss: It was a joy to speak with you. Take care of yourself.

Linda Clifford: Thank you so much, Bill. You take care of yourself too.