Judy Garland and Joey: A Son’s Memories of his Mom 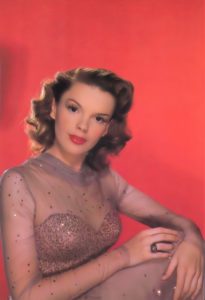 When it comes to the stars of the film and entertainment world, there are very few whose name still rings out with an almost instant recognition like that of Judy Garland. Whether it’s through the eyes of a child watching The Wizard of Oz or the adults who have always had a consistent and never-ending love affair with her legendary talent, there is just no forgetting her truly iconic stature. With each new generation since Garland’s death in 1969, the glow of her unique gift is one worth experiencing again and appreciating anew.

This is what Judy’s third child, Joey Luft set out to accomplish with Judy Garland in Concert with Joey Luft. To bring the performer to the masses once more, in what many consider her finest hours of entertaining on The Judy Garland Show. Painstakingly colorized under the guidance of Sid Luft, the television show now captures an even more colorful Garland at her peak, showcasing her legendary persona.

Her only son, Joey Luft shared his vivid memories of perhaps the world’s greatest entertainer… who was first and foremost, a loving mother when I met with him in October of 2014.

Showbiss: Was it all your dad’s work on restoring and colorizing your mom’s television show that was the impetus for doing this production?

Showbiss: When did he start colorizing the episodes of The Judy Garland Show?

Showbiss: Did it take some convincing for you to do this production or did you feel this was the time?

JL: I just thought this was the right time to do it. We had the colorization done and when I heard about it, I thought it was a really good idea. I wanted to get it out there to teach this generation about my mom. That’s really why it came up.

Showbiss: So, you have a few generations of people who more than likely haven’t experienced this aspect of her career.

JL: Right. Exactly. Once you see her… you get, hooked. (Laughs) She’s so amazing.

Showbiss: One of the remarkable things I think about the television show is the fact that she connected with the camera so well, her eyes…

JL: Her eyes are like, amazing. I know. I know… I went to all the tapings of the shows. We’d go [Joey and Lorna Luft] in Friday and do it on Friday and it would air on Sunday. So, that’s what we’d do every week. We’d go to the show, watch it being taped on Friday and on Sundays, we’d watch it on TV. All the shows…

JL: It was really special.

Showbiss: Oh yes, definitely. I had the pleasure of interviewing Judy Garland historian and author Scott Schechter about his book, The Day by Day Chronicle of a Legend and we talked about Judy’s time doing the television show. He’s since passed on.

JL: There are a lot of people who were involved. It’s hard to think about all the Munchkins being gone. The only one now who is left is Jerry Maren [a member of The Lollipop Guild]. I knew them all and they’re gone now. It just rips your heart out. But, Margaret O’Brien [Meet Me in St. Louis] is still around.

JL: Yeah, everybody knew my mom. Everybody in Hollywood just about. (Joey does the “bow down” motion with his hands and laughs).

Showbiss: You have been such a private person and have stayed for the most part, out of the limelight. How has it been being on stage, talking about your life with Judy?

JL: Each show is getting better. It’s getting more comfortable. As time goes by, we’ll perfect it more and add to it to make it a better show. Right now, it’s really nice. By the time we’re through, I’ve seen the whole audience enjoy it. Basically, for the most part…they were pretty happy about it. So, that makes me happy.

Showbiss: Excellent. What are the traits you feel you definitely inherited from her?

Showbiss: What about from your dad, Sid Luft?

JL: Just about the same thing. I learned to always do things right, always try to be cordial and nice to people and just do what’s right.

Showbiss: Please tell me about your friendship with John Kimble (Sid Luft Living Trust) and how he ended up working with your father for twenty years.

JL: Well, John and I met a long, long time ago. It was on Santa Monica beach and we became friends and we grew up together. Then, later in life, I was driving in a car with my dad and he goes, “Isn’t that John Kimble over there?” I said, “Yeah, it is.” So, we waved to John, he got in the car and my dad was talking to him. Next thing I know, my dad was asking him if he wanted a job (laughter). That was 1989. So, John’s been around a long time and we’ve been friends a long time.

Showbiss: [I talked with John Kimble at this point] Did you start off as a “majordomo,” or man of all tasks for Sid?

John Kimble: It was my technical background. Sid had a flair for all the brand new gadgets that were coming out. He loved audio. He had an artistic eye and he loved music. He loved songwriters

and stuff like that. Anything that came out new technically, he’d call me up and want me to put it in. So, I did all that work for him. When he asked me if I wanted to work for him and I did, too…I asked him if there were things that people had never heard before [of Judy’s]. Sid had all the original audio reels of Judy performing at The Palace Theatre and her tour in the 1950s. He had them all on reel. Since I got him a [Digital Audio Tape] DAT machine, we transferred all the ten-inch reels to DAT. Over a period of time, since technology evolved, we kept cleaning it up, cleaning it up and cleaning it up.

Then, Joey started hanging out because Sid had a bad knee and started slowing down. So, Joey, Sid and I would work together and we would test the audio all the time on different people we would invite up, until we got it to a place where it was just pristine. Then, towards the end, Joe and I made a deal to keep working because Sid was slowing down. Thank God, he had the foresight to take those things out of the shows and now, they are completely restored and cleaned-up.

Showbiss: Yeah, it’s a huge responsibility to have all that.

JK: Right. Nobody knew Judy better than Sid. How to preserve it and what he thought was special and unique. Sid had a very unique perception of where he was, when Judy would sing. That’s why we took these particular performances and did them.

Showbiss: You’ve had a number of performances of Judy Garland in Concert so far. What has been the most challenging aspect and the most enjoyable for you?

Showbiss: Describe the thrill that you get.

JL: Just watching how it came out colorized. It’s just amazing and it makes it like you’re almost there again. There’s a part of the show where we have a montage of pictures of my mom, my family…about 120 pictures and “Happiness is Just a Thing Called Joe” is playing in the background. It’s really beautiful. It goes through my whole life and all the pictures with my mom. I really enjoyed doing that.

Showbiss: This might tug at your emotions, but it’s not a hard question I don’t think. As you were always at her concerts as a kid, when did you start to explore her films?

JL: The earliest was The Wizard of Oz. That was when I was really young… really young. Growing up, the first time I saw it, I was alone with a babysitter. My mom was on tour in Europe. When the monkeys came to kidnap my mom to take her to the castle, I thought it was for real. (Laughs) And I freaked out. I started crying. My mom had to call me from Europe and get on the phone with me and go, “Joe, this is just make-believe.” I’m going, “No, mom. I just watched it on TV…it’s got to be real.” That was the earliest.

Through the years, sometimes we’d go to screenings and watch The Wizard of Oz and The Clock or A Star is Born. Sometimes, we’d go see two a day. That kind of led me into it. Then, I started watching every movie… every time it came on, I’d watch.

Showbiss: Yeah, and you were in I Could Go on Singing. (Judy’s final motion picture)

JL: I Could Go On Singing, yeah. I was there on the boat and thought, “I gotta get myself on camera.” (Laughter)

Showbiss: Exactly. One of my favorites is Girl Crazy and one of the reasons is Judy’s laughter. I never saw her laugh so much on film and she’s just beautiful.

Showbiss: And her attitude in that she doesn’t like Mickey’s character in the film at the beginning. So unique in comparison to the rest of their films together. In Girl Crazy it’s like “no.”

Showbiss: This has been marvelous. I’m proud of you and glad you choose to do this at this part of your life.

Joey Luft: I am too. It’s very important in that it teaches people and gets the word out there, so that’s basically what I’m doing and it keeps me busy. You really want to get the point across that she was really “human.” Really, a human being who was trying to raise kids and work. She wasn’t this tragic figure. She was a happy figure. She was a happy person and she just kept going. It’s like, “Joey, come on. Get in the limousine. Let’s go!” Always with a sense of humor. You’d ask her a question and she’d just like, fire something back real quick. It’d put you on the floor. She was so funny. She had a beautiful sense of humor.

Kristine W.: A True Dame of Dance Music Ms. D and Me: Life With the Invincible Bette Davis