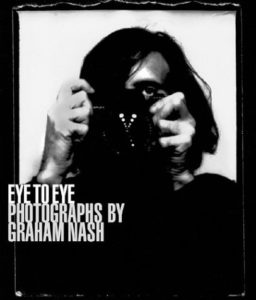 Graham Nash is an internationally known icon of rock music, as a solo artist and for his legendary partnership with the group Crosby Stills Nash and Young. The band is known as an important part of musical history, with songs such as “Suite Judy Blue Eyes,” “Our House” and so many other timeless musical compositions. As a member of CSNY, he was inducted into The Rock and Roll Hall of Fame in 1997.

Graham Nash is also a highly respected photographer and pioneer in the art of digital printing. His printmaking company, Nash Editions has been acknowledged by the Smithsonian Institute for their efforts. They are utilizing his Iris ink-jet printing machine as the very first printing machine in the world to make digital portfolios. His collection of mesmerizing photographic images from Eye To Eye led me to interview him in the spring of 2006.

Showbiss: I read that you went through over 20,000 of your photographs in putting together Eye To Eye. What was the process like of narrowing the images down to those presented in your book?

Graham Nash: I guess you always have your favorites, you know. So, you start with that list. I needed to choose 500 images that I truly loved then whittle that down to 300 and finally to the 187 in the book itself.

Showbiss: It’s not something you can do in one sitting, most definitely.

GN: I wanted to do an all-black and white book. I didn’t want to disturb the reader by putting in a black and white page and then a color page. I’m working right now on a book of my color work. I shot color a couple of years from 1969 to 1971. Then, I stopped shooting color and when I got the new digital cameras that had the resolution of film. I started shooting color again. I now have 197 color shots that I think are very interesting that I want to share with people.

Showbiss: Excellent. The process of color was so different in the late 60’s.

GN: Everything was very different. The film had more emulsion on it. The processing was more intense, the paper that you printed on was better. Now a days, it’s hard to get decent silver paper. I noticed that when I had my own darkroom and was printing my own shots. The amount of silver emulsion in the paper was getting less and less as the years go by.

Showbiss: I so enjoyed your book. I sat down and didn’t flip through the whole book quickly. I was thinking, “Oh shoot. He didn’t put any captions.” Then, I got all the way to the end of it and was like, “Oh neat. There are the captions.” That was a wonderful way of putting the book together. You got the chance to digest the images as they stand alone.

GN: I appreciate that you got that. Whenever I go to a museum, I’m often disturbed by people; the first thing they do is go to the label and see what kind of a thing it is. They rarely look at and soak in the image itself first. I wanted the images to stand by themselves. Without you knowing, that’s a shot of Neil or that’s Joni or that kind of stuff.

Showbiss: Your life on the road as a musician; how integral was this lifestyle to shooting some of your photos?

GN: Very integral. I spent years in the Holiday Inns in the very early 60’s when I came to America being on the road. I’d stay in and order room service or watch the news, I wasn’t as exploring as I should be. So, for twenty-five years now, I first get into the hotel, I put my suitcase down, I make sure I have my key in my pocket and I take my camera and I’m off.

Showbiss: I would imagine that the drive to be a photographer would have been with you even if you were a plumber and not a musician.

GN: If I’d been a plumber for the last forty years, I’d be damn good and I’d charge you a fuckin’ fortune! (Laughter)

Showbiss: What was one of the most surprising images to catch your attention out of the blue?

GN: One of the things I really like; you notice there are almost no pictures of landscapes and no pictures of clouds and stuff or kittens with balls of wool. I’m intrigued by madness that appears in front of my eyes that is gone in the blink of an eye, unless I have the discipline and the courage to take the shot.

Showbiss: One thing that comes to mind is your traffic cone image.

GN: That’s a perfect example. I was driving by my house. It was less than a hundred yards from my house. I was on the way to pick up a Starbucks, actually. I saw this out of the corner of my eye and I thought, “Ahh man.” I had my camera with me, but I was kind of stuck in traffic. I couldn’t make the left or the other left. I thought, “Should I let it go? No… no, no. It’s just too good,” so I drove blocks around the block and came and parked and took the shot. I felt really good about my discipline about seeing a shot and getting it, even though it was inconvenient.

Showbiss: Another thing that struck me about your image of that, as well as numerous others in the book is they almost appear to be paintings and not photographs.

GN: It’s very painterly. I think I have a secret ambition to be a painter. When God forbid, this music stuff stops, I’m not expecting it to anytime soon. Once it stops and I have a little bit more time, I’m definitely going to turn to painting without question.

Showbiss: There is an extraordinarily beautiful photo of Cass Elliott in the book. Please tell me the circumstances behind taking that photo?

GN: I was telling her a story about Crosby. I remember what it was. I was recalling with Cass, Cass’s story about Crosby in I think, 1966; where they had been up for days. They’d been in the studio; they were obviously a little whacked. They went to dinner at The Old World, which was a restaurant on Sunset Blvd. and Crosby fell asleep in a plate of spaghetti. (Laughs)

He’s down. The story is that when they made sure he wasn’t going to choke to death; they all got up and left him at the table. They said to the waiter, “Mr. Crosby will pick up the check.” Crosby says to me, “The first thing I remember is someone tugging at my sleeve and I kind of wake up and my face is in the spaghetti and meat sauce and I’m stuck with the check!”

Showbiss: That’s hilarious and that photo is excellent. Your father was integral in your love of photography. Did he have his own darkroom?

Graham Nash:  No, he did not. We lived in what was called, “a two up, two down.” We were very poor in my younger days. So, we had a living room and a kitchen and two bedrooms upstairs and that was it. When my dad would take us to the zoo and shoot pictures of us, he would bring the film home and he would use my bedroom as the darkroom. He would take the blanket off my bed and put it up against the window to block the light. It would turn into a very primitive darkroom.

That’s when I first saw the magic of photography, which has remained with me to this day. When I saw a picture of an elephant, come floating out of nowhere on this white piece of paper in this colorless liquid. My dad saying, “Come on, wait… wait.” I’m going, “Dad, nothing’s happening.” Then, all of a sudden, it came in. It was magic to me.

Ms. D and Me: Life With the Invincible Bette Davis Sheena Easton: Scottish Siren of Song