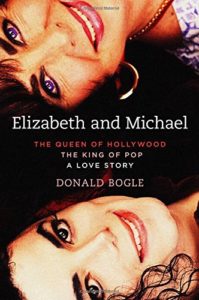 There have been a cavalcade of books written about Elizabeth Taylor. Whether they are on her fashion, her fame or her films, the fascination is still strong. Why, Elizabeth Taylor even wrote four books herself during her lifetime. Yet, does Nibbles and Me count? Elizabeth was only a child with a chipmunk for that one. In regards to Michael Jackson, the passion for his incredible talents as a singer, songwriter, dancer and humanitarian has also sparked numerous books on his life. Some sensational to make a buck and some that are realistic and heartfelt. Jackson himself, also penned one book called Moonwalk.

Author Donald Bogle takes the two superstars of film and music a step further in a truly innovative and original way. Bogle has combined rotating chapters on both Taylor and Jackson’s lives. He also gathers all that he could about their friendship and love for one another that began in 1984. Donald Bogle’s empathy and diligence for these two legends reads very well and true. His perspective is clear-cut, polished and sparkles with a shine that beautifully captures the light, spirit, work and complexity of the two in Elizabeth & Michael: The Queen of Hollywood and The King of Pop: A Love Story.

These two people were kindred spirits. Elizabeth Taylor as “Mother Courage” who managed to weather any personal health problems or public scandal with a “live and let live” attitude and perception of mind. While Michael Jackson; a pure perfectionist of the “Peter Pan” philosophy was both magical, intuitive and a lost man, at times. This strength of devotion matched with the power of will and adoration brought their chemistry out in spades. The pressures of fame, scandal and press kept them united and formed a very special bond between the two. It’s hard to imagine we’ll ever see this combination or unique attributes of Elizabeth Taylor and Michael Jackson again… both of them were truly one-of-a-kind.