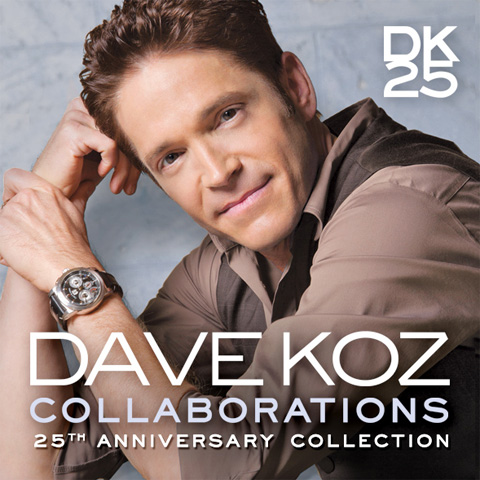 Dave Koz is an extremely gifted musician. When marking the 25th anniversary of his career as a highly skilled saxophone player, he turned to the other artists and musicians who have been an important part of his musical journey. Not only looking back on collaborations with the very best of singers such as Stevie Wonder, Stevie Nicks and Rod Stewart but the fine artistry of other jazz artists such as Jeff Lorber, Rick Braun, Herb Alpert, David Benoit and more. Not only that, but Koz created three new recordings to mark the occasion for his Collaborations: 25th Anniversary Collection. It’s all about the “sax” as Dave Koz shared several special memories of his career, so far and how he wholeheartedly believes “the best is yet to come.”

Showbiss: It’s a really terrific and diverse anniversary collection on DK25. What was the process like selecting these collaborations?

Dave Koz: To let this anniversary go by without doing something to acknowledge it would be kind of a mistake. But honestly, I had my head down so much and just continuing on… that I didn’t even realize that 2015 was the 25th anniversary (laughs) until somebody said it to me. Once I figured out “okay” this is what’s happening, let’s do something different. Instead of just doing a “best of” or greatest hits, why don’t we take something that really is meaningful to me? Collaborations have been the essence of my life in all the things that I do. It’s the thread that runs through everything. So, I wanted to share songs that fans may or may not have heard. Kind of the ones that fly below the radar, yet are very meaningful to me.

Showbiss: There are a lot of phenomenal singers and fellow musicians who you have performed with over the years.

DK: Like the first collaboration I had with Barry Manilow. It was kind of an obscure song from a concept album that he made (“Apartment 2G: I Hear Her Playing Music” from Here at the Mayflower). It was the first time, we ever worked together and he sang my name in the lyric of that song. Most of my fans had never heard that song. Or working with Rod Stewart, I did a bunch of stuff with Rod over the years. My fans may not have heard that music. Rod was kind enough to let us use one of those songs. Then, we did three new songs, too! Three new collaborations.

Showbiss: All the songs are so well done. “When Will I Know For Sure” and “Think Big” are memorable to me from the past. I had never heard your all-star version of “All You Need is Love” until now. What amazes me most is the diversification in the music styles and how you’re able to show the fact that in your career, you’re going from soul to rhythm and blues or the jazz waltz tempo to even country. It’s a solid set.

DK: Thank you! You listen to a lot of music.

DK: If you say it’s solid, I’m going to believe you.

Showbiss: What stands out in your memory of doing those four Great American Songbook albums with Rod Stewart?

DK: First of all, I worked with the great producer, Phil Ramone. That was the first time that I’d gotten to know him. I ended up hiring him to produce my At The Movies album and that was such an amazing thing to work with him. Rod…working with him, he’s a total rock star! I was not familiar with what that whole thing was like. Not just in the studio but we did a couple of TV shows together and a couple of live things together. Hanging out with a rock icon like him, it’s a different experience all together. I loved that. The thing that was also wonderful about that project was working with Clive Davis. He was the executive producer on all four and he had a lot to say about every little item on that project, which means sax solos, too.

He would send notes back and I would go back and fix things, that he would want fixed… there is a real method to his work ethic. He knows exactly what people want to hear. I learned a lot of very valuable information about record making and about artistry.

Showbiss: Your rendition of The Game of Thrones theme on DK25 is some of the very best work you’ve done so far. It’s a whole other dimension to your sound and reminded me of something created by Lalo Schifrin.

DK: Lalo Schifrin… yes, it’s interesting that you put those two together. It’s such a great piece of music. That was actually Scott Bradlee’s idea, who I’ve been a fan of for a long time. He just said, “Come on over to the studio. We’re in Los Angeles and let’s figure out something that we can do.” I put on my “Postmodern Jukebox” outfit, because those guys dress up and they always look very sharp. For them… recording and making a video are the same thing. Everything is on video. That’s how they made their name is doing these songs online.

We did two songs. One was a new version of George Michael’s of Wham’s “Careless Whisper.” Then he said, “Have you ever watched The Game of Thrones?” I was like, I’ve never seen that show. Of course, I know it’s a phenomenon. He said, “It’s a beautiful theme.” We recorded it. The next thing I know, he had put both those videos up. Both of those videos are now nearing four million views each! This is the success of Postmodern Jukebox. They have sort of sidestepped all the typical things that artists have in their musical lives of record companies, promotions and radio… they’ve done it really on their own. I’m very proud to be involved in that.

Showbiss: Stevie Wonder came in to create this all-star version of Lennon/McCartney’s “All You Need is Love.” That had to have been pretty amazing.

DK: I’ve known Stevie for a long time. I’ve made music with him when I was on the air in Los Angeles doing radio. It’s a different thing when somebody like that comes in and sings and plays on your album, though. It’s another whole level of commitment. The fact that he did that… he didn’t need to do that. Talk about “pinch me” moments. I was going, “I just hope that I’m not dreaming this.” He’s like the epitome of love on the planet Earth at this juncture in time. It was so perfect. Did that really happen? It was so otherworldly and amazing.

Showbiss: Your 2010 album Hello Tomorrow features prominently on DK25 with three cuts featured. Was this one of your favorite recording experiences?

DK: Well, I think so, too. That album… you can listen to it on one level and purely put it on and enjoy it. But, if you really want to go a level deeper, there’s a lot in that album. It’s probably my most personal project. There’s a lot of different elements that were deeply personal to me and they’re there, if you want them. That’s why I think I keep going back to it, time and time again.

Showbiss: Over the past 25 years, what has been the most challenging aspect and also, the most rewarding?

DK: Well, I suppose both of those are part and parcel of the same thing. As far as challenge is concerned, keeping it interesting for me and the audience. I’ve learned from very important people; mentors in my life that you have to be constantly engaged in your own career, to come up with that next idea and to grow. That’s the greatest challenge and it’s also the greatest reward. Where you can get to a place where “all of a sudden,” how did we get to 25 years! That just doesn’t happen by chance. That’s a lot of hard work. It’s a lot of people’s time, energy and passion but how rewarding it is to have 25 years under my belt. I also intuitively feel like the best years are still to come. That’s the greatest gift is to not feel like it’s over. In many ways, I’m hitting a new stride. I’m having the time of my life. Bar none.

Showbiss: Excellent and nine Grammy nominations but no win yet.

Showbiss: I just hope you’re not the “Susan Lucci of Sax.”

Dave Koz: Well, I already am. I have no problem with it. It’s nice to be invited to the party… Always.

Rihanna: Island Princess of Pop A Cut Above: Ana Matronic of The Scissor Sisters