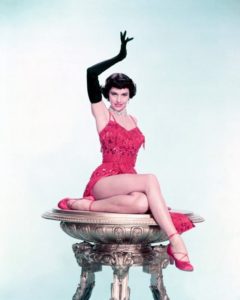 There are moments in time when you realize that you are talking with someone who has filled your life with musical joy. This was the case talking with the lovely Cyd Charisse. She was truly a major motion picture star who created so many wonderful musical numbers in such films as The Harvey Girls, Singin’ in the Rain, The Bandwagon, Brigadoon, It’s Always Fair Weather, Silk Stockings and many more. Interviewing her in 2003 was such a memorable experience. At the time of this interview, the editor of the publication I was working for only felt that a small portion of our interview was needed. Now, here is the complete interview with a legendary lady of dance. As Fred Astaire once said, she is truly “Beautiful dynamite.”

Showbiss: It’s a really fantastic honor to speak with you.

Showbiss: The first film I ever saw you in was The Harvey Girls.

CC: That was my first film (laughs).

Showbiss: I have the soundtrack to that and I really enjoy “It’s a Great Big World.” It’s really a beautiful number.

CC: As I recall, we all had red shoes.

Showbiss: What was that first year like? The experience of working at one of the biggest and the best studios in Hollywood?

CC: Well, I came out of a ballet company that had been traveling. You know, when the war came, of course they were all broken up. I came back to MGM. I first walked on that set… it was like a fairytale land. The commissary was full of stars, the writers, the directors; everybody who worked there was at lunch. It was just a very glamourous studio at that time.

Showbiss: Before I go any further, I must ask you to give Mr. Martin my best. I have the soundtrack to Ziegfeld Girl and he is really awesome in that film. [Cyd Charisse died in June of 2008 and Tony Martin, her husband in July of 2012]

CC: Yeah, that was a good film for him.

CC: You know them all.

Showbiss: Yes. I’ve been watching musicals since I was about 10-years-old.

CC: Good. Silk Stockings was a lovely film and Rouben Mamoulian was the director. The Russian fit right in there.

Showbiss: Yes. The instrumental to the title track “Silk Stockings.” That’s one of the prettiest instrumentals I’ve ever; just for the beauty of it.

Showbiss: Yes. I know this might be hard but if you had to pick one sample of your dancing to show someone who had never seen any of your work, which musical number would you pick and why?

CC: Well I would say, just for myself, “Dancing in the Dark.” [From The Bandwagon] It’s a very expressive kind of number. It’s lovely. The music is wonderful and it tells a little story right there.

Showbiss: Speaking of “Dancing in the Dark” Fred Astaire described you as “beautiful dynamite.” What words would you use to describe Mr. Astaire?

Showbiss: I’m blown away by the opportunity to talk with you. It’s something I never thought would happen in my lifetime.

Showbiss: I got a copy of The Two of Us [Autobiography of Tony Martin and Cyd Charisse] I enjoyed the fact that each of you had consecutive chapters to tell your life story.

CC: It was nice to do that for a change, so people don’t get tired of reading it (chuckles)

Showbiss: You mentioned in the book, your good friend Esther Williams. Do you two still keep in touch?

CC: I keep in touch as far as this town. I see her sometimes or other. I don’t see her that often. She’s having a lot of trouble with her knees and legs and everything. So I do see her around and she’s doing fine.

Showbiss: Good. Martin Scorsese is doing a big-budget film that starts production next month or so. It’s based on Howard Hughes’s life.

Showbiss: He chose Leonardo DiCaprio to portray Howard Hughes. I don’t see that at all.

CC: Not at all. He was Texan you know. A shy Texan… he really was.

Showbiss: Got it. What do you consider the hardest production number you’ve ever worked on?

CC: The hardest? Well, a long time ago we were doing a film called Meet Me in Las Vegas and we were doing “Frankie and Johnny.” And someone had just taken over the studio [MGM].  What was his name? He knew nothing about dancing at all. He arrived on the set and he looked around and he said, “I must see this number.” Well, you know, you don’t dance that hard from beginning to end when you’re shooting a number. You break it up and you’ll do a shot here and a shot here and a shot there. But, he wanted to see it all at once.

Well. It was a difficult number to do and I said, “Okay.” Away we went and we did a terribly difficult number with lifts and slides and all those things to do. When I got home… I was sick for two days. Really, I was ill for overdoing it. So, I think that was the most difficult thing that I ran into.

Showbiss: Has it ever occurred to you that out of all Vincente Minnelli’s films, that you and Judy Garland worked the most with Mr. Minnelli? You both made four films directed by him.

CC: He was a great director.

Showbiss: What was the experience like of working with him? He had such an intricate eye for design.

CC: He really had a wonderful eye. When he thought the set is right, it’s right. When we got ready to do Brigadoon he was so precise with everything that he did with Brigadoon. We couldn’t go overseas to do it. He wanted to do it in Ireland but they wouldn’t let us do it. They had to build a huge two-stage area that had to look like we were in Ireland. He was such a great designer that when you walked in on that stage… it was fantastic. He would take hours and hours in the morning just dressing the set. Make it look right. He wanted it to look right.

So my goodness, we worked so hard and so late on that picture. Van Johnson finally said he was going to leave at 6 o’clock every night and he did. Most of us hung in there until about 8 p.m. or so with that film. It took us a long time to do it. I saw him sectioning the way he wanted it to look, which always paid off, you know.

Showbiss: “Waitin’ for My Dearie” popped into my head.

CC: Yes. That was a lovely little song.

Showbiss: I wanted to ask you about when you had just completed Two Weeks in Another Town and you got your next role as “Bianca.” Marilyn Monroe wanted you for that role. I believe the only times you filmed with her was when she played the Swedish maid incognito in the uncompleted Something’s Got To Give.

CC: She was such a nice fine person. I really liked Marilyn. Everybody did. But it was very tough to get her down on the set you know. Unfortunately, you know. But, it would have been a charming picture with her. I was just disappointed it never did come off.

Showbiss: Most definitely. Congratulations on your “Spirit of Dance” award and I look very forward to meeting you. As you said in your book The Two of Us; your only drink of choice is a vodka martini… I’d love to buy you one.