Brendon Urie: The Force of Panic! At The Disco 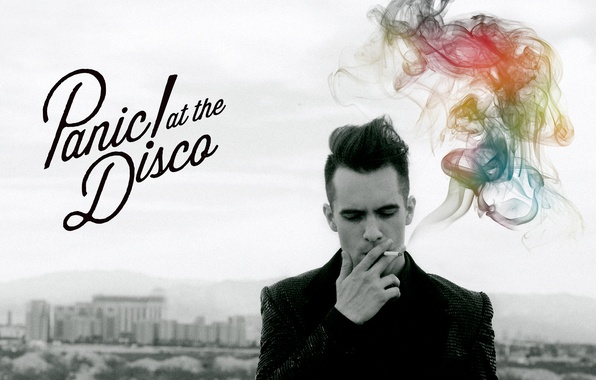 When it comes to personality plus and talent, along with a glam-attitude and good looks, Brendon Urie is the guy. His group Panic! At the Disco got its start in 2004 and though it has gone through some shifts in style and band members, Brendon has triumphed as the lead vocalist/songwriter/musician hit his stride with their latest release Too Weird to Live, Too Rare to Die. Their blend of punk, new wave and rock sensibilities have created a modern and passionate musical escapade with songs such as “Ms. Jackson,” “This is Gospel” and his ode to sexy individuality in “Girls/Girls/Boys.”

The dynamo performer spoke with me during the midst of the band’s This is Gospel tour. Brendon elaborates on the inspirations behind his songwriting process, just what he enjoys so much about live performances and shares a bit of his fascination with Frankie… Sinatra, that is. Urie is quite an interesting character as evidenced in Brendon Urie in 26 Minutes while creating a major following for his Vine video posts. You can’t help but smile at this arresting personality and passionate musician who is living his dream.

Showbiss: There is a definite energy to the album that I enjoyed so much. Though, when listening to some of the lyrics and watching some of the videos, it’s kind of dark. How did the process of writing these new songs work for you?

Brendon Urie: Oh yeah, first… thank you very much. That’s awesome. I love hearing that. I think for me, I like having the context of having some kind of “figure triumphant” big beat in the song with sometimes a darker message. There’s definitely stuff on this album that, I just needed to talk about it. I felt like I was a different person. I’d grown out of this person that I thought I was and I thought I just wanted to move ahead. It was such a good opportunity to really get that off my chest and talk about things I’ve never talked about before… that’s a big thing for me. It was a good opportunity to be honest about personal experiences of growing up in Vegas. That’s what it was.

Showbiss: When you’re writing the songs say for example “This is Gospel,” were you looking for a moment where you can just let loose vocally? You really stretch your voice.

BU: Yeah, thanks. That’s been a huge part, the melody. I love The Beatles and Paul McCartney. When I was about ten-years old, my dad and I were watching Wings Live and Paul McCartney was talking about how he wrote “Yesterday” and he said, “It started with scrambled eggs.” I remember that caught my attention….so cool. It doesn’t matter what you’re saying, the lyrics can come later. The melodies were such a big thing. Certain vowels and “love” and a certain look definitely just changed the lyric to the music in general. I think it’s why some of the band…it’s so easy to do a “yeah, yeah, yeah” part, just because it’s nice. It’s really those moments where there’s a sheer triumphant moment of joy. What better way than singing out gang vocals. I love that stuff. That stuff for me is some of the most golden parts of music. I love that band.

Showbiss: On the song, “Miss Jackson” there are five additional collaborators on writing this song. How did you end up with this many people adding to the song? Were they sitting around in a room or did you drop off the majority of it and they just picked at it…how did that happen?

BU: (laughs) Well, it’s always kind of an interesting thing. Now, I’ve done it a few more times. I love it. It honestly started when the band came up with the different songs we had gotten from somebody and all they did was put a kick and a snare beat, like a hip-hop beat underneath this other sample and we were like, “That’s a cool idea.” So, that was one collaborator.

Then, I had been writing with Butch Walker and Jake Sinclair and they are some of my closest friends. They are just the best dudes ever, including my favorite songwriters right now. They’re just awesome. It just came about because we were so excited about the idea behind that track. I just started writing all these verse lyrics, so I had the verse melody and then Butch came over with this chord melody and when all that kind of stuff happens at that time… that was the most excited I had been about the record. We had most of the record done…there were lyrics in the songs that I wanted to add in on some that we had. It struck a chord with me and I got really, really excited. Collaborating with other artists is so fun. It’s why I wanted to be in a band in the first place.

Showbiss: Definitely… and I love the reference to Janet Jackson’s song “Nasty” as well.

BU: Yeah, that’s exactly what it was. My initial idea was I wanted to use a female celebrity from the past, so I tried singing with other names like Audrey Hepburn, because I have the biggest thing for her and also Marilyn Monroe. No matter what song that was, it had to really work with the melody. I love the melody so much, I had to figure out what name can go. I was watching the video, I was going through and there’s Janet again. I love her. I was watching that video and then I came about it. Oh my god, I’m so awesome. (laughter) And then, I was also thrilled just like in Outkast, that’s a cool thing to me.

Showbiss: Yeah. I have to say congrats on the Alternative Press Award for Best Vocalist.

BU: Oh thank you… that was a surprise.

Showbiss: It’s deserving. After I learned a little bit more about you, your renditions of Frank Sinatra songs like “World On a String” and “My Funny Valentine” are excellent. Your energy and personality in singing those songs is very refreshing to watch and hear.

BU: Thanks. Thanks so much. That’s awesome. I love that.

Showbiss: When did you get the tattoo of Sinatra on your arm? It jumped out at me during the “Girls/Girls/Boys” video. Not that there wasn’t anything else to look at.

BU: (hearty laugh) Yeah, I got it last year before we started to tour. We were leaving in three days and I had wanted to get a Sinatra tattoo but I hadn’t found an artist that I could fall in love with to get a full-on photo done on the tattoo. I met this guy, Rich, who is now a really good friend. It worked out and it was very serendipitous. I fell in love with the black and white and grey and just the blue eyes.

Showbiss: Nice. Now, how fun was it to get pelted in your piano version of “This is Gospel” video? Please tell me you did that in one take.

BU: Yeah, we did. My only idea was I’m going to do a piano version of this song because I love it and the piano. For the video, all I said was, “Let’s do it super slow-mo and just chuck a bunch of stuff at me. I’m not even going to tell you what to throw. Just come up with some ideas and just throw it at me while I’m singing.” It would just be a barrage of insanity. It occurred to me that maybe I made a mistake. They had old, rotten, spoiled milk, platefuls of garlic spaghetti… I was like, this stuff stinks! I can’t smell this.

Showbiss: Oh I know. I can see you reacting to it. It’s like a Gong Show moment where they are trying to break you. Your face almost cracks a couple times.

Brendon Urie: Yeah (laughs) I definitely gave them permission to just be cart blanch for chaos and just to go for it. I wanted to get in touch with those moments, those real reactions where, like, wow, I did not expect that! I didn’t know what they were throwing at me… no, just go for it. It worked out. I love that stuff.

Showbiss: In the Vine video on YouTube, Brendon Urie in 26 Minutes, I have to say you’re a real ham. You’re so entertaining, kind of a spaz and so much fun.

BU: (cracks-up) Oh that’s funny. I appreciate that. I’m definitely a ham. I like to showboat a little bit. I’m insane.

Showbiss: A favorite song right now off Too Weird to Live, Too Rare to Die is “Nicotine.” I love how you reference the habit of smoking in regards to being burned in a relationship. Are there strings on that song?

BU: There are. Actually, it didn’t start that way. It started with this weird synth sound which we thought was kind of cool. I liked it but I don’t know… I’d rather do guitars and strings. We use our friend Rob Mathis for string compositions. Yeah, I love being able to add that stuff. The strings on ‘Nicotine’ are some of my favorite compositional pieces that we had to date.

Showbiss: In regards to this Westboro Baptist Church issue about them picketing your concert in Kansas City, I think your counter by making donations to the Human Rights Campaign was such an affirming and positive rebuttal.

BU: Thanks. We thought so, too. It’s so easy to just kick back and attack them, you know…hate with hate. I honestly thought what could be even better and what would make them more upset and so mad than to make them a part of donating to HRC because they hate human rights. I was actually kind of bummed that they only brought 13 people and they only stayed for fifteen or twenty minutes. Just enough to get there, be interviewed and then they left. That’s kind of weak.

Showbiss: A couple of sentences I want you to finish for me. The first one is, My backflips…?

BU: (cracks-up) My backflips have started to take a toll on me.

Showbiss: (laughs) Yeah! I can just see the headline, “Tour cancelled because of backflip…” You have such phenomenal energy on stage. Keep your fingers crossed and keep doing them as long as you can. And now this sentence… Brendon Urie is…?

Showbiss: What are some of the emotions you’re feeling now that you been on tour for over a month now?

BU: Luckily, I’m still excited every day, when we get to a new city. I think that’s important. The only reason that it continues to be so fun is because I enjoy it so much. I can’t think of anything else I’d rather be doing. This was my dream for the longest time and the fact that I get to do it is surreal. Yeah, I’m truly fortunate to be in the situation that I’m in. I always remember that. Yeah, I just always have a fun time performing for people. I’m a ham, just like you said.

Showbiss: I kept looking at your face and was thinking, “Who does he remind me of?” Then it hit me. Your face reminds me of Montgomery Clift and Collin Farrell.

Brendon Urie: Oh my god! That’s a huge compliment. They’re both good-looking people. I appreciate that.

A Cut Above: Ana Matronic of The Scissor Sisters Marina and The Diamonds: Music’s Modern Woman