Gary Vitacco-Robles released Icon: Volume 2 [1956-1962 & Beyond] of his extensive and astute biography on Marilyn Monroe. Many consider his two volumes on Monroe to be the definitive presentation of her life and career. Robles offers a thoroughly engaging study of the woman behind the persona, while also diligently presenting her as representing Hollywood and life in the 1950s. As a Licensed Mental Health Counselor (LMHC), he offers innovative insight into the emotional and psychological challenges faced by Norma Jeane Baker and her resilience and utter resolve to create an identity known and loved by the world still to this day, Marilyn Monroe.

In this conversation conducted in 2014, Vitacco-Robles offers an inside look of his work, as he describes his passion to present a clear, unbiased and sensitive biography with not a conspiracy theory in sight. For anyone who has ever been enthralled or completely fascinated by this iconic woman of history, his insight and dedication to Marilyn Monroe’s life is much welcomed and deserved of accolades.

Showbiss: How did you deal with writing her whole life story? Even the bibliography for the book is so extensive. When did you 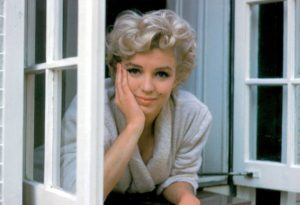 Gary Vitacco-Robles: That’s a great question. Thank you for validating really, what an enormous task this was. I had written the first short book about Marilyn’s six months in her last house Cursum Perficio. I wrote that back in 1999. I got such positive feedback that I needed to write the full-length biography. My readers were saying that if anybody is going to put together a book about Marilyn… it’s got to be you.

It just seemed so daunting. I knew what I would have to tackle to do it correctly. From the time I was researching and I wrote that first book, I started to collect materials and sort them, thinking if I ever tried to climb this mountain someday… these will be the materials that I’ll use. So, I just started from the beginning, to do it right and wrote all the way through to her death and then the next fifty years, how she’s re-interpreted.

I started to really put words down in 2005 and where I started was just the movie, Niagara. I wrote the book not in chronological order, whatsoever. I started with the chapter on Niagara. Then, I think I wrote about Some Like It Hot and then the last year of her life. I started skipping around. Where Vol. 2 begins with The Prince and the Showgirl and the early Miller years, those were some of the first pieces I wrote of the true biography. Interestingly, I ended with the dawn of her career. So, that’s how I did it.

Showbiss: How did you manage your time in doing this… with a full-time job?

GVR: I’m a psychotherapist and I work four (ten and a half hour) days. So, I have Fridays off and weekends off. Fridays, while everyone’s working, is really when I was doing this. It didn’t impede upon my relationship or my family or anything like that. I would just immerse myself in everything about the era and the music that was going on. Sometimes, I would write and play music of the era… just to try and ground me. I had to write to my own mood. It was really a challenge.

Showbiss: Would you find yourself frustrated at times or was it just a case of doing something that you enjoyed doing at your own pace, yet knowing the responsibility of it?

GVR: It did become work. My real desire was to do Marilyn justice. There’s an enormous responsibility in writing about someone’s life ethically in doing the research and selecting sources that seemed truthful. Knowing what to weed out, that I wouldn’t even begin to address. If anything, I would try to dispute it. There’s a bit of protecting her and commenting on the injustices of I think… irresponsible biographers. I was so committed to doing that and that came very naturally.

Showbiss: The over-all impression of your books is extremely level-headed and diligent in that regard.

GVR: I’m very linear and I get caught up in the details. I thought, if I have to summarize or I have to cut, the book is going to be like everyone else’s, it won’t be unique. That’s when I came up with the idea to do it in two volumes… so I can contain everything. It became overwhelming because of its mammoth size.

Showbiss: It’s interesting that the very first chapter you wrote was on her film Niagara. How did you happen to begin there?

GVR: Niagara was a film noir done in color that had a lot of symbolism in it. Also, I thought it was a great depiction of post-war fear of sexuality and about women’s emerging sexuality. There was so much to deal with and that was kind of on the level that I wanted to explore Marilyn’s life. The movie was considered so scandalous at the time. I thought it gave me a lot of dimensions. Her films would be the anchor and I would just thread between the films what was going on in her personal life.

Showbiss: It’s such a comprehensive book in that regard that you do include synopses of all her film work in the back, as well. Yet, the most important aspect is the portrait you create of her as a woman.

Showbiss: It’s also fascinating how many people Marilyn had as friends and interacted with in her short life.

GVR: Her life touched so many significant people of the 20th century… not just in the film industry. It gave me an opportunity to speak to all of that and on speaking about her a half century after she died. Many of the biographies were written about Marilyn when her contemporaries were still alive and everyone still had a context of her. Now, I’m writing for a generation born well after she died. You can’t just drop the name Frank Sinatra. I have to really explain who he was in history.

Showbiss: That is one of the strong points in itself. You put her within the context of the times and the society in which she lived in.

GVR: Marilyn is almost a dichotomy. We look back at her now and we say, “Oh, she was a feminist and a trailblazer.” In many senses, she definitely was. A woman of her era to break from the studio and form her own corporation… that took a lot of bravery to do. Women were not doing that. But, at the same time, she was still a product of her era and if you interviewed her at the time, she very much wanted to be a wife and a mother. She believed many of the contemporary beliefs about being a woman. When we look retrospectively towards her, we see that she was pushed in other directions. I don’t think she saw herself as a “trailblazer.” She said there were two things in life… love and work.

Showbiss: Who wrote a biographical book on Monroe?

Gary Vitacco-Robles: Yes. I’m really not aware of a mental health professional writing about Marilyn. Her story is just so right for that. There’s these armchair psychologists… mostly men are writing about Marilyn and they are very misogynistic. They will believe any speculation that maybe she was very sexually promiscuous, but then they’ll completely dismiss any information that she was an abuse survivor. That appalled me. You can’t really tell Marilyn’s story without talking about childhood abuse.

Now, we know so much about complex trauma and she was a survivor of complex trauma and that accounts for so much of her life. It just puts everything in place. People want to judge her or they don’t look at her life in the context of that. This is a woman who suffered from a mood disorder, horrible childhood abuse and still was able to make it, become successful and inspire people. The fact that she had a tragic ending does not dismiss the fact that she was incredibly resilient. I really felt like… who’s going to write it? Who’s going to say this? It’  s got to be done by someone who can speak to… in a scholarly way, what her life experience was.