ANITA O’DAY: The Jezebel of Jazz 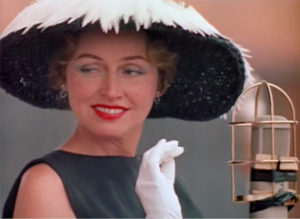 “You never forget your first time.” In this instance, it was my first interview with a legendary lady of jazz. I distinctly remember thinking, “This woman has seen more good times and bad times and is a survivor of it all.” Anita O’Day was 85-years-old at the time of this interview. Her legacy sings for itself and it was a distinct privilege to talk with her. At the time, she was still performing in New York and still as original and feisty as ever.

Anita O’Day is one of the first ladies of jazz. She had been singing for more than seven decades and is a rare breed of singer in so many ways. O’Day worked with the finest jazz musicians and has an incredible array of recordings that make up her legacy. Her singing style has all the power of the wind with a lyrical skill that is able to stir up a gentle breeze or whip a jazz riff into a tornado of fast phrasing and intuitive whirlwind.

Showbiss: Is your singing talent a natural ability or did you have any training?

Anita O’Day: I always had it. In school, they had music lessons and that’s where it began. I was 10-years-old.

Showbiss: You just continued to create your own style?

Showbiss: You’ve been associated with some of the best musicians ever in the world of music. Who are some of your favorite musicians?

Anita: I sang with a lot of bands. I would say Gene Krupa (drums) and Oscar Peterson (piano). Especially Roy Eldridge (trumpet). We’d do these songs in the band with a part here and a part there. That was what I liked to do.

Anita: We have about five places. Iridium is one. I’ll be doing about 12 songs. There are solos and some of the songs last a long time with round robins around the players.

owbiss: Your singing is really in a class all its own. Where did you get this passion for music and singing?

Anita: I think I took a swig of whiskey and somebody said, “Somebody says you sing. Get up there and sing!” I got up there and I liked it on stage and that was it. (Laughter)

Showbiss: You’ve had the best songwriters ever during your career. Is there one song that is your favorite to sing?

Anita: Well, I like working with the horn… with Roy Eldridge. So, I’d say “Let Me Off Uptown.”

Showbiss: You still sound the same as you ever did.

Anita O’Day: Well, thank you. I just get out there. I don’t overdo it or not do it enough. If you can get it on the road “correct” you’ll have something.

The Passion of Tove Lo: Sexy and Smart Cyd Charisse: A Legendary Lady of Dance