A Cut Above: Ana Matronic of The Scissor Sisters 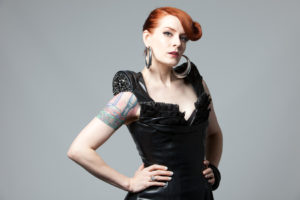 What would Talking Heads be without Tina Weymouth? Or, think about The B-52s without Kate Pierson and Cindy Wilson. The same magical combination of music and creative talent applies to the addition of Ana Matronic to Scissor Sisters.

Along with Jake Shears, Babydaddy and Del Marquis, Matronic adds her own special spark to the winning sounds of the group. With her fiery red hair, Matronic writes songs for the foursome, sings lead and harmonies and has the stage presence of a red-hot fireball of fun.

Scissor Sisters’ fourth album, Magic Hour is a kaleidoscope of sounds. There are many hot grooves and clever lyrics along with a few songs of reflective thoughts from Jake Shears. Ana Matronic elaborates on the new material, explains the meaning of “kiki” and even does her own fastball impromptu pitch for the wonderfully done Magic Hour.

Showbiss: Thank you for taking the time, Ana.

Showbiss: This album is super fly. It’s really fantastic. Who thought of that lead commercial on the opening page of the Scissor Sisters website? It’s really cheesy but has an “Oh, so cool” 1970s feel. It’s off the hook.

AM: Yeah, we are super into it as well. That commercial was the brainchild between Jake [Shears], along with Amy, who is a woman in our management; who is quite amazing. And Ben Hoffman, Babydaddy’s brother who is a comic writer—Ben is a really ridiculous person. We grew up in that sort of era. We would see those K-Tel commercials… “Hey man. Is that freedom rock? Yeah!” All those good ones and that’s always been an inspiration to us.

Showbiss: I have to tell you, speaking of a crack-up, the song “Let’s Have a Kiki” is tons of fun. Every time I hear it, I laugh or smile

and the bongo beat techno is sensational.

AM: That’s good, glad you like it. There’s been a really amazing response to that song. I mean, just the other day, my friend Keith tweeted “let’s have a kiki.” He’s a real bloke’s bloke. I don’t think that he is sitting around looking at a lot of drag-themed techno. A “kiki” means a good time with your friends, basically. It’s a love letter of sorts to all the drag queens who I have ever shared time with and danced with on the stage or dance floor.

That is a big number. (Laughter) I know many, many wonderful drag queens. That’s where I got my start, in the drag scene in San Francisco.

Showbiss: Will you please share the creation of that song?

AM: Yeah, sure, it was actually Jake’s idea. Jake will take apart parts of people’s speech and make songs out of that. It’s sort of the same process that came out of “Filthy Gorgeous,” which are the two words in that song that I say the most of all. So, a “kiki” is

a term that you hear come out of my mouth a lot. You hear it come out of the mouth of our tour DJ, Sammy Jo, who is and always will be a big influence for us.

A “kiki” means a good time with your friends, basically. It’s a love letter of sorts to all the drag queens who I have ever shared time with and danced with on the stage or dance floor. That is a big number (laughter); I know many, many wonderful drag queens. That’s where I got my start, in the drag scene in San Francisco. It’s also a real love letter to the house party, Jake and I both love to throw a good house party. That conga part in the song we call “the pots and pans,” I love that part.

Showbiss: How would you describe the creative energy that went into making this fourth album, Magic Hour?

AM: It was really intense and very fast, it was the fastest we’ve ever made a record—the energy in the studio was quite frenetic. There would be several rooms with writing going on and producing in another. It was a really interesting and sort of crazy, something that we have never really done before and luckily it seemed to produce good results. In the last weeks, we certainly took our time with them. Yeah, this is a new experience but a really good one.

Showbiss: On several songs on Magic Hour and in particular the song “Inevitable,” the harmonies display the quality of The Bee

Gees’ style and it’s excellent. That’s a supreme compliment. Was that an essence that Scissor Sisters were trying to capture?

AM: I think The Bee Gees harmonies have always been one that really makes the hair stand up on the back of your neck. They have always had the most beautiful thick-layered harmony. That was definitely the energy we were trying to achieve with that song. Sailing down the Pacific Coast Highway in a Pontiac with the top down and your Farrah Fawcett shag is blowing in the wind… not a care in the world.

The sun is shining off the sea, you are living in a Karaoke video. That’s what we were going for with that, it was the track that was produced by Pharrell. He was really kind of into the idea of us getting soulful and harnessing the disco sounds that The Bee Gees harnessed to such great success in the 1970s. They did it to such an influential degree.

Showbiss: I’m going to put you on the spot now. Please give an “only available on TV and no money back” pitch for Magic Hour.

AM: Umm… (Laughter) Well ladies and gentlemen, if you would like to go on a sonic odyssey that will leave you simultaneously warm and fuzzy, and wet and sticky… pick up a copy of Magic Hour. We promise you half a poignant tear or two and plenty of good times.

Dave Koz Brendon Urie: The Force of Panic! At The Disco